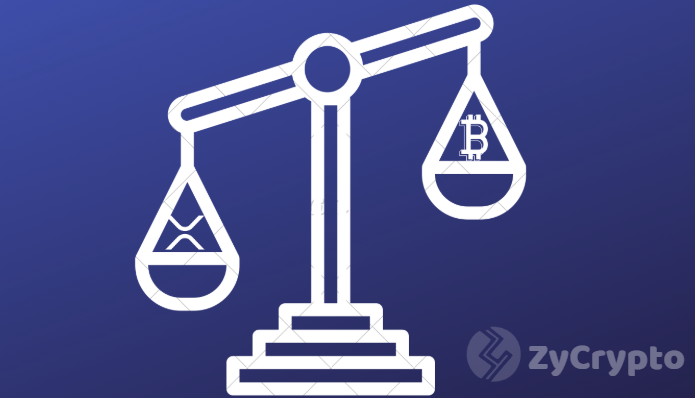 A recent tweet by nation’s leading provider of trusted ratings of Stocks, Mutual Funds, Cryptocurrencies, ETFs, & Financial Institutions, Weiss Rating confirms the rumored talks between Ripple meeting with Trump’s administration. As a result of these talks, it seems the White House is taking a deep interest in Ripple’s XRP, shifting attention from Bitcoin as it used to be. This change, as explained, comes as the worry about China dominating the most valuable cryptocurrency Bitcoin (BTC) continues to increase.
Quoting the tweet, Weiss Rating shared that “China’s #BTC dominance worries Trump’s White House, pushing it toward XRP. The open-to-everyone model of PoW mining resulted in oligopolies instead of decentralization it promised to create.”

China’s #BTC dominance worries Trump’s White House, pushing it toward XRP. The open-to-everyone model of PoW mining resulted in oligopolies instead of decentralization it promised to create. #XRP is moving towards decentralization, while BTC seems to be doing the opposite.

Many have referred to the top cryptocurrencies, Bitcoin and ethereum as decentralized systems while referring to cryptocurrencies such as XRP as a centralized system. This is majorly because a known group is controlling it.
However, a report by David Schwartz, who is the CTO at Ripple debunks earlier thoughts, saying that the Ripple’s XRP is more decentralized than any other cryptocurrency project out there.
The illustrative report informed the community that blockchains which use the proof-of-work algorithms are prone to centralized control by a minority with the most hash power as seen with bitcoin’s 51% attack.
On the other hand, David says the “XRP Ledger uses a consensus protocol that relies on a majority of validators to record and verify transactions without incentivizing any one party.”

What Does The Community Think?

The highly controversial post made by Weiss Rating hadn’t come without its drama as those who agree or oppose, had points to back their opinions.
A community member by the name Artjan had questioned facts released by Ripple, saying; “XRP is in the hands of a company? How can you call it more decentralized than BTC? Funny;).”
Likewise, on the other hand, members had also questioned Ripple’s decentralization, but on Bitcoin, most people seem to agree on the fact that the cryptocurrency is moving towards centralization.