After a slow Bullish momentum yesterday, the Bears have taken over and painted the markets Red. The effect of this has been a dip in investor sentiments, leading to increased sell-offs of Digital coins as investors look to avoid making losses on their investments. This was the case of XRP as well as Bitcoin Cash whose Relative Strength Indexes are downward facing, headed into the oversold region. Tron (TRX) has maintained a Bullish outlook, however, with its RSI heading into the undersold area at one time.

Below is a comprehensive analysis of these coins: 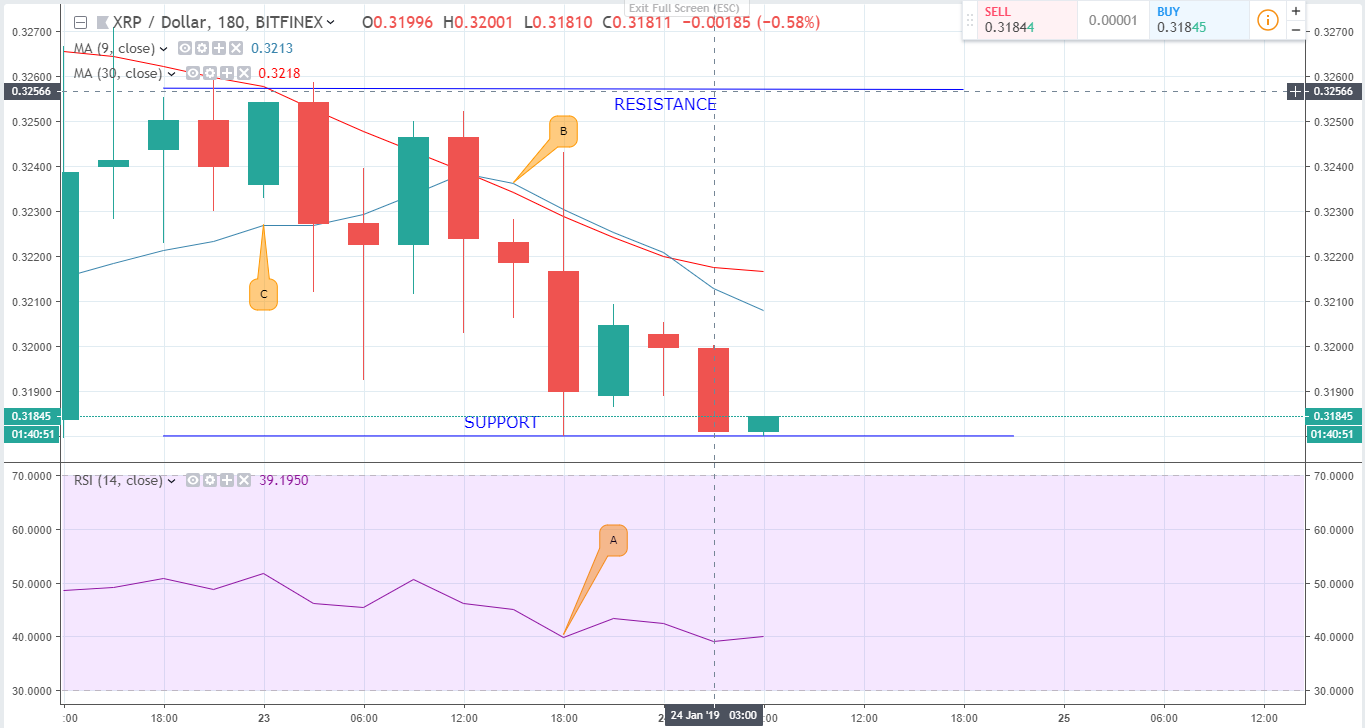 XRP has gone through a Bearish momentum over the last 24 hours, dropping from $0.32360 to the current $0.31811. This represents a 1.7% fall which has led to a decline in investor confidence as seen in the RSI (A). The Relative Strength Index has dropped from a high of 50 and is now at 40 threatening to go below 30 (the oversold area). This shows that investors would rather sell than wait for the coin to Boom.

Another indicator of the bearish trend is both Moving averages. They are both downward facing. Also, the 30 day EMA (B) crossed over the 9 day EMA (C) twice in the last 48 hours which indicates that the Bearish trend will continue for longer. 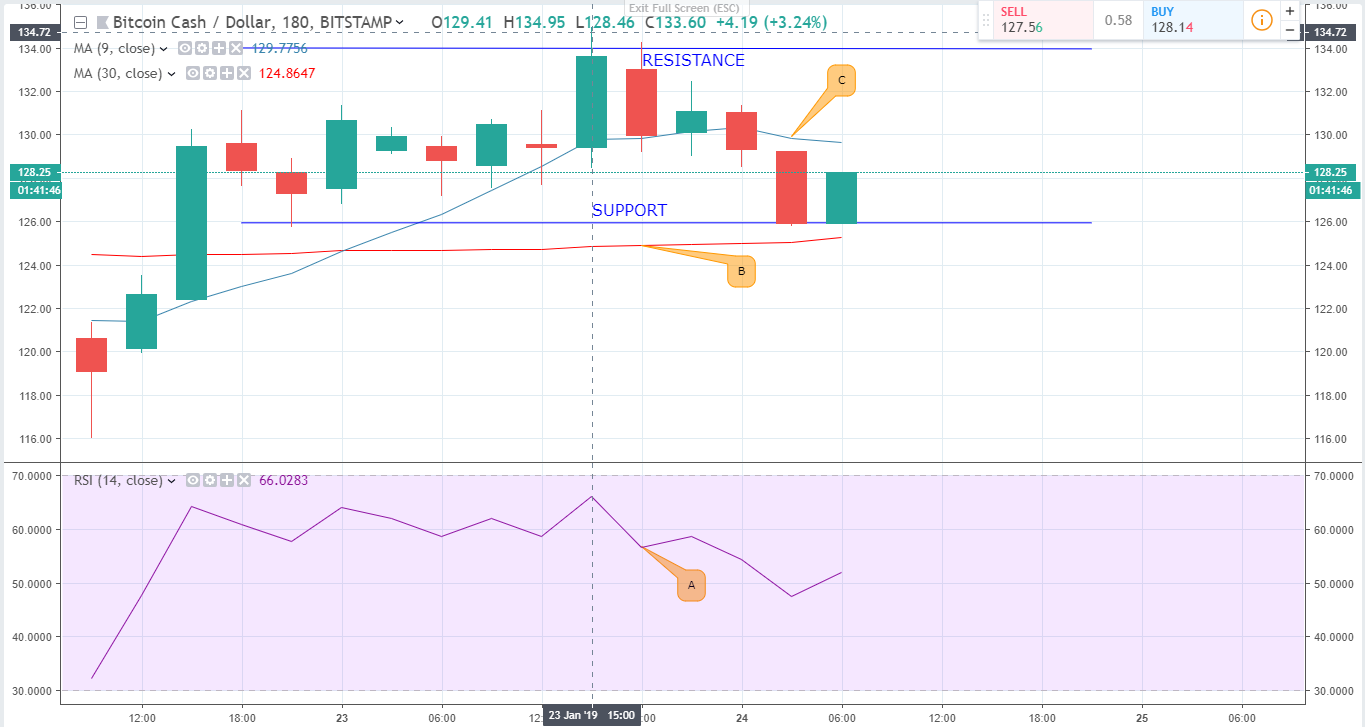 Bitcoin Cash started off trading at $127.55 and is now selling at $125.92 at press time. This translates into a 1.6% drop in BCH’s price despite putting up a Bullish outlook for better parts of yesterday. The Bulls pushed BCH to a high of $134.95 before it dropped to the lowest level of $125.92. At the moment, BCH’s price has found support at the 30 day EMA (B) which shows that it might dip further lower in price.

Despite the slow drop, Support has been pushed further upwards to the $126 mark and resistance lies at $134. In the markets, yesterday’s Bullish momentum pushed investor confidence up with the RSI (A) gravitating towards the ‘under-bought’ area. Today, however, it has dipped after the downward outlook in the chart which indicates reduced investor confidence. 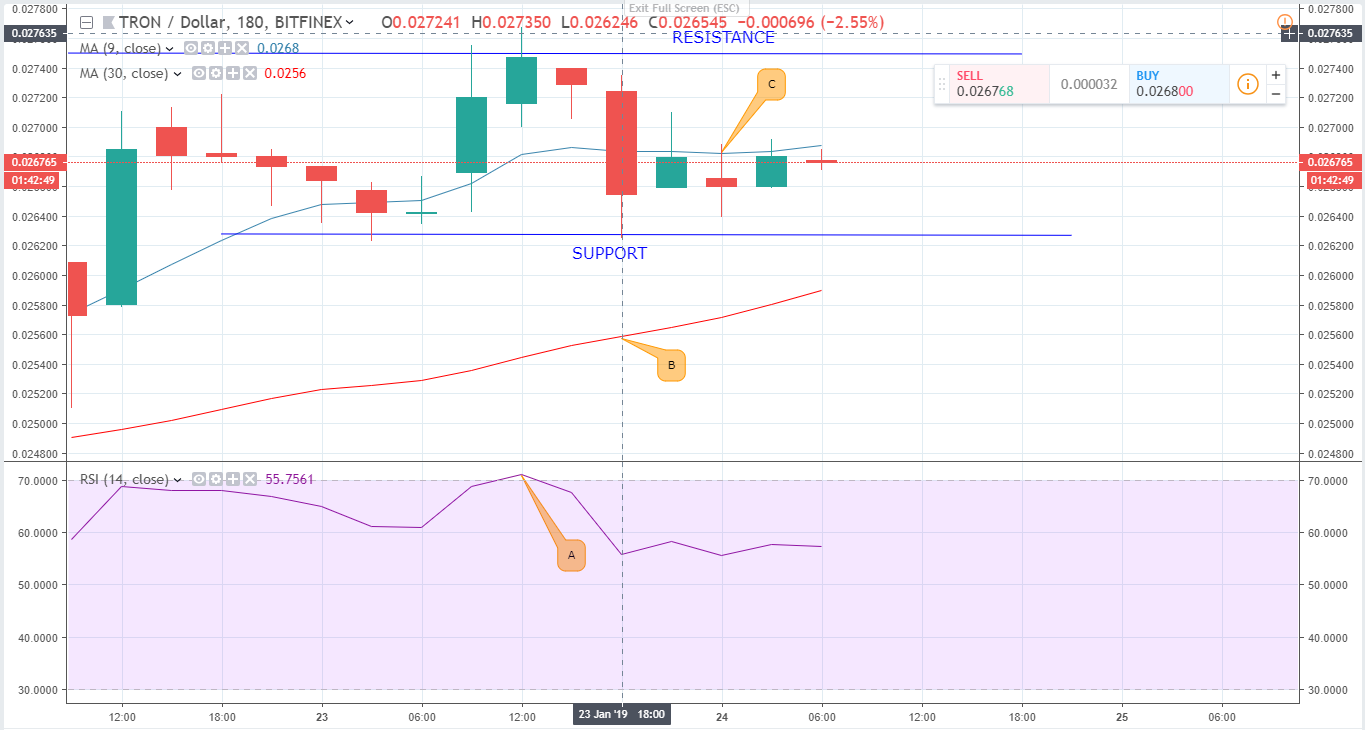 The last 24 hours have been marked with a strong Bullish drift for Tron. It began off at $0.0262 and is now at $0.269. This marks a 6% increase in its price. The effect of this has been improved investor sentiments. At one time, the RSI (A) crossed over into the undersold area before dropping slightly to rest at 60. This shows little sales have been conducted. This shows that Investors are confident the Bullish trend will continue.

Also, the 9-day EMA has been dominantly way above the 30-day EMA and is acting as price support. This indicates that the Bullish trend will continue in the short term.