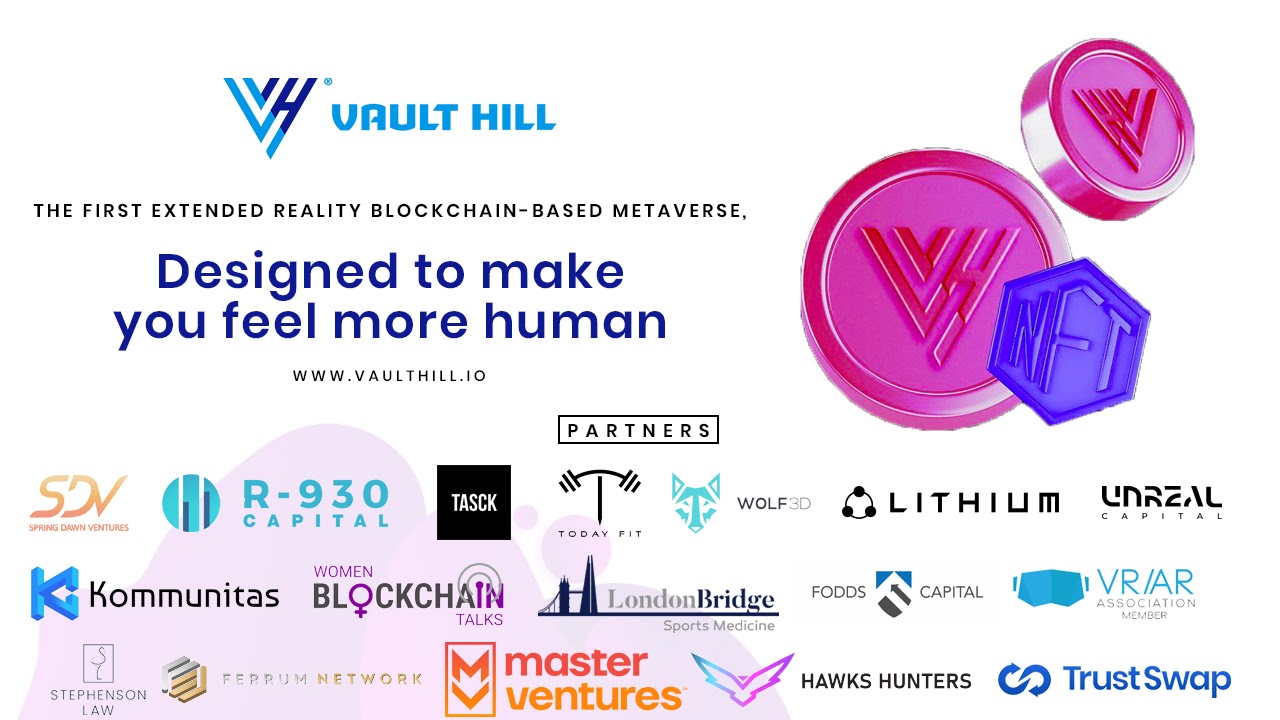 Vault Hill, the first human-centric, blockchain-based metaverse, is pleased to announce that it has raised $2.1 million in pre-seed and private investment rounds to support the development of the metaverse meant to improve the human experience. R-930 Capital, Unreal Capital, Spring Dawn Ventures, Evan Luthra, Herd Ventures, Lithium Ventures, Girnas Capital, Ferrum Network, TrustSwap, and other angel investors participated in the rounds, which were led by Master Ventures.

This is a significant step forward in Vault Hill’s plan to humanize technology by creating a constructive metaverse that focuses on basic human instincts, allowing users, content creators, and developers to explore their unrestricted creative freedom while monetizing their project creation in a secure ecosystem.

“This is a credit to the hardworking, skilled, and diverse team at Vault Hill, as well as the originality of our product offering in the wide competitive sector we are operating in,” Jimi Daodu, Founder and CEO of Vault Hill, said.

Meanwhile, with the first round of fundraising completed, Vault Hill is excited to announce that the second round of fundraising, namely the public sale of the $VHC token, is currently ONGOING on major launchpads – PAID Ignition, Moonstarter, TrustSwap, SuperLauncher, Lithium, MaticLaunch, and Kommunitas – from January 10-14, 2022.

Vault Hill has already secured six collaborations with worldwide brands (particularly for digital wearables and increasing health and wellbeing) that will be building their virtual office in the metaverse once it starts in Q1 2022, despite the fact that the metaverse is not yet operational. Similarly, the Vault Hill community is continually expanding, with about 90,000 #VaultHillers across all social media pages.

What separates Vault Hill so significantly that it gets an unbelievable amount of attention from notable blockchain venture capitalists, businesses, and individuals, especially given the growing blockchain sector and the many metaverse projects already in existence?

The metaverse’s human-centric character is the first distinct feature. Vault Hill is not delivering a faraway impractical concept, but rather a platform that users can realistically engage with, thanks to the incorporation of human factors in the metaverse. This implies users will be able to do whatever they can in the physical world, plus a lot more. Users will be able to interact with others, form romantic connections, play games, improve their health and wellbeing, curate art, buy virtual land, own NFTs, transact on the secure platform using the $VHC token or another cryptocurrency of their choice, and explore the seven Districts themed after basic human instincts and functions. The metaverse’s promise as a place where users can explore various elements of themselves and, in general, feel more human with each visit is both intriguing and clear.

Second, Vault Hill is the first virtual environment to have urban planning and development features, ensuring that users preserve their Virtual Land (VLAND). Users that own virtual land in Vault Hill City will have complete creative control over their area, allowing them to develop whatever they choose. This might include fitness centers, fashion studios, art galleries, museums, or even libraries, and they can earn money by having other people interact with the projects on their property. Landowners can also choose to keep their VLAND and sell it later at a greater price on the market.