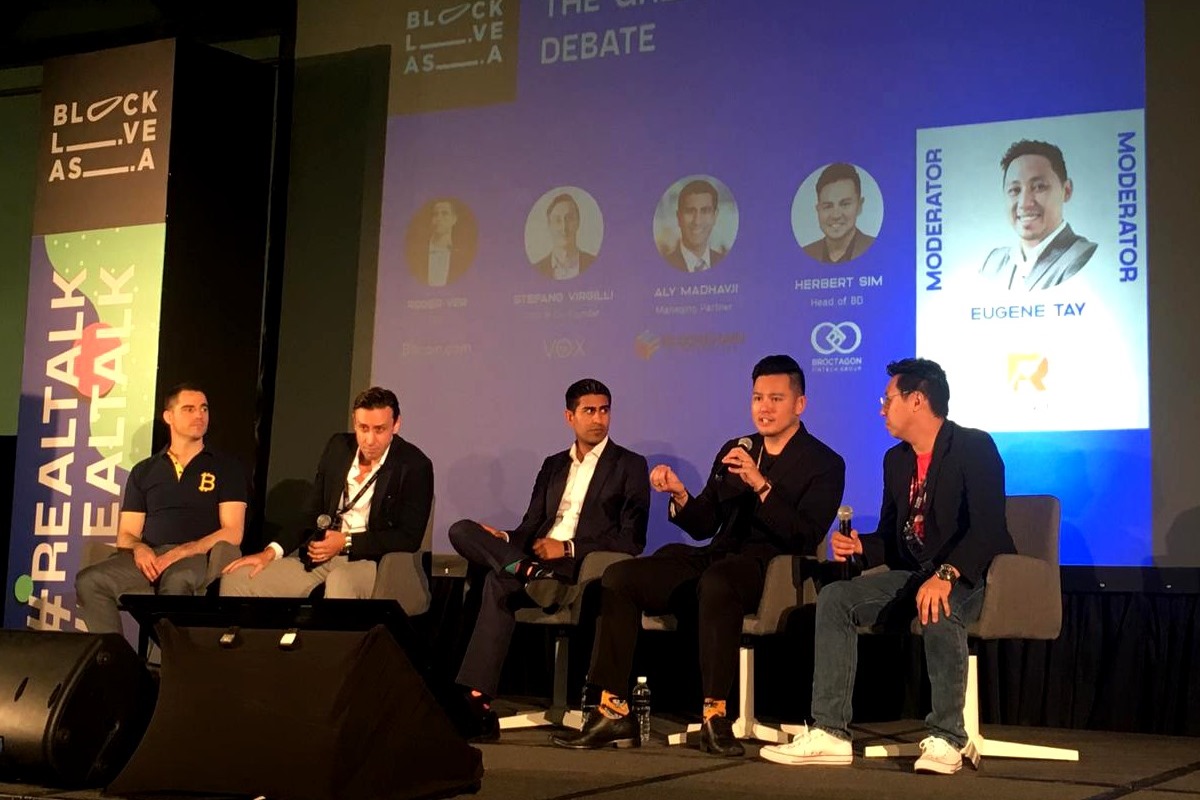 At a blockchain festival held at Marina Bay Sands, Singapore in April – Block Live Asia 2019, was an impactful topic of discussion was brewing amongst the panelists of industry heavyweights such as Roger Ver of CEO of Bitcoin.com, Herbert Sim, a.k.a. The Bitcoin Man, founder of Crypto Chain University, Head BD at Broctagon Fintech Group; Stefano Virgilli, CEO of VOX.sg, and Aly Madhavji, Managing Partner of Blockchain Founders Fund.

Aptly titled as the Great Consensus Debate, several types of consensus mechanisms were thrown into the bull-ring and pitted against each other over one single, powerfully polarizing issue. Proof of Work or Proof of Waste?  Major clashes erupted from fiery soundbites as earnestly implored by Herbert, “All blockchain and crypto industries need to look at less energy-intensive methods of mining, if not pollution will reach unimaginable heights.” In direct rebuttal, Roger retorted, “Pollution is not necessarily a bad thing. Look at the progress of mankind before and after pollution. Would we be sitting here right now if all the pollution was curbed?” All parties had no visible signs of relenting, with a near-religious conviction on their standpoints.

As the incendiary debate blared loudly in the heated background, one wonders: Is an apocalyptic future really the endgame from the result of PoW? What other solutions can humanity choose?

Before knowing about the various methods, one must first know what consensus mechanisms are. Blockchains are made up of a framework consisting of crucial components such as block sizes, validators and of course, consensus mechanisms. For crypto exchanges that pursue effective management, blockchain affirmation is mandatory. Known as consensus mechanisms, these affirmations seek to secure mutual agreements, or universal shared ledgers, by upkeeping a consistent ledger to every network player in real-time through block validation. However, as akin to a box of chocolates, there are a myriad number of consensus mechanisms, each with its own respective form and function.

In this section, we take a deeper dive into the most popular types of consensus mechanisms in the market currently.

Invented by Bitcoin’s founder, Satoshi Nakamoto, PoW is undoubtedly the most popular consensus mechanism, employed by blockchains such as Bitcoin, Ethereum and Monero for its simplicity and resistance to a wide variety of cyber-attacks.

Proof of work relies on the computational power of the miners to solve complex cryptographical problems to solve the blocks containing transactional data. Users get compensated for each block that they approve and confirm, with the surplus on the compensating sums serving as an incentive for the miners. In order to successfully mine a block, miners must solve a cryptographic puzzle in the form of achieving a particular hash by varying the block’s header. As each header variation contains many zeros, many attempts must be made, resulting in a massive amount of work to be performed. Consequentially, this requires an intense output in terms of computational power and carbon consumption.

According to digiconomist, economic models show that Bitcoin’s energy consumption via PoW could skyrocket to the same size as Austria’s electrical energy consumption, which amounts to 72 TWh per year. On 22 January 2019, the Bitcoin Energy Index also estimated that a staggering 100% of mining revenues ($2.3b) were spent on electricity costs alone. Another report by researchers at the University of Hawaii places the estimates of Bitcoin’s annual carbon output at an alarming figure of 69 million tons, a quantity that could possibly result in cataclysmic global warming repercussions.

Proposed by a Bitcointalk forum user back in 2012, PoS is the eco-friendly counterpart to PoW’s high computational requirements that consumes far lower measures of energy. For this consensus model, it heavily relies on probability, where validators are decided in accordance with their staked capitals. The larger the number of coins held, the higher your chances of adding a new block of transaction to the blockchain. Unlike PoW, blocks are forged, as opposed to being mined. As PoS does not require specific hardware or high energy consumption, it is one of the most inexpensive consensus mechanisms in the market.

A variation of the PoS model, DPoS users can use their balance stakes to elect their desired nodes to be the block makers through an approval voting network. Every coin holder can partake in the election, with the chance to create blocks proportionate to the aggregated votes garnered in comparison with the other participants. While PoS is similar to winning the lottery, DPoS is a fairer, community-driven initiative that gives increased network ownership.

Proof of Time and Space

Also highlighted in the debate, by Herbert, he shared about Proof of Time and Space, a relatively new consensus concept to explore. BitTorrent’s Bram Cohen proposed the verification of computer storage ownership as an alternative to proof of work. Under the present system, computing vast numbers of hashes leads to a race to find the cheapest power supply and use it as efficiently as possible.

According to Cohen, any alternative to this system would need to be based on a proof of something less power-demanding. And that resource would be storage.

Conceived by Intel back in 2016 for its Hyperledger Sawtooth platform, PoET endeavors to secure a reasonable opportunity for each network user, instead of arbitrary determination. Every participant is assigned a random hold-up time, and the member with the shortest hold-up time gets to offer the next block after the allocated waiting time.

Being used on a permission blockchain created by Intel, this allows applications to run trusted codes in a protected environment, resulting in wait times that are created fairly, with participants obliged to wait for the required time periods.

The sheer diversity of consensus mechanisms showcases the difference in methodologies for all blockchain structures. However, regardless of the mechanism, the objective remains true. The constant approach is to always ensure community fairness, system security and network longevity. In the ever-evolving blockchain space, both its rooted and radical stances truly make it an exciting movement to be part of.