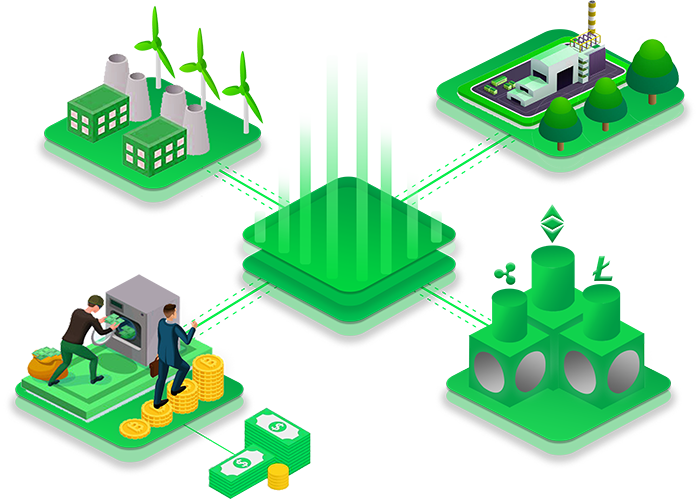 In 2012, the global demand for power and energy was computed to be 158,000 TWh, and it’s predicted to be rising ever since. Unfortunately, renewable energy sources have only provided for around 19.2% of this total world power demand. Further, to attain this share, numerous schemes have been proposed and implemented which include government policies, commercial-scale technology development, tax incentives, and alternative funding avenues.

Despite all these benefits, a considerable portion of power continues to be generated by non-renewable and scarce resources, taking a toll on the already damaged climatic conditions. Today, even as people are looking for and demanding safer as well as cleaner living standards, there exist several bottlenecks in its complete adoption.

To pave the way for a cleaner environment and to eliminate the hurdles that are plaguing the same, TerraGreen has launched a renewable energy platform that’s powered by blockchain technology. With over two decades of experience in the space of green energy, the founding members of the project are incredibly passionate about the vision of designing a sustainable economic system that runs on renewable energy sources.

The TerraGreen project does not achieve this purpose ordinarily; like its cause, the processes and technology implementations are also out-of-the-box and extraordinary. It unites everyone involved in the process and brings them onto a common platform to supply, exchange, trade, and utilize cleaner energy resources. In doing so, it eliminates middlemen throughout the supply chain. Be it technology, supply chain, or financial aspects- TerraGreen simplifies it all.

By leveraging blockchain and cryptography, the project empowers all the stakeholders, including biomass suppliers, renewable energy technology developers, power producers and investors with higher returns and fairer tariffs. The use of these technologies standardizes the processes for all stakeholders while introducing a new layer of transparency across transactions. Both buyers and sellers save time and other resources with more efficient processes. On top of all these merits, smart contracts make the entire platform safer, faster, and more reliable.

Moving and achieving beyond a business idea and plan, TerraGreen has already begun its journey to success. Having secured numerous producers of renewable energy, the combined power generation that it has secured it over 100MWe across the ten countries of Association of Southeast Asian Nations (ASEAN). Further, as energy crop plantations can assist in the creation of biomass which is a source of renewable energy production, TerraGreen envisions to acquire thousands of acres of land for planting Acacia Mangium, trees known for their adaptability and robustness.

The project has also identified its greatest challenges and is working relentlessly to solve the same. A significant roadblock in the production of renewable energy is storage of raw materials for processing. Instead of relying upon the industry or other players to provide solutions, TerraGreen has already acquired 2000 hectares of land in Malaysia for the above-mentioned energy crop plantation and will also be using it to supply raw materials for the sector.

With producers enjoying better and more efficient price allocation and buyers paying only for the energy that they use, the TerraGreen platform ensures that the entire ecosystem evolves with sustainable possibilities. With plans getting translated into actions, the decentralized application is all set to disrupt the renewable energy market with better equilibriums and features.