People are beginning to see Litecoin in a whole new light, and that’s especially because the crypto now looks more bullish with lots of expectations. Litecoin has been on the rise over the last few days, and that trend has persisted even when the rest of the top 10 cryptos aren’t doing so great.

LTC Is In Its Own Market

According to a tweet by The Crypto Dog, LTC seems to be in its own market. The Twitter user went on to argue that if this trend continues, Litecoin could experience even more surges and break into a serious bull run.

Litecoin’s block halving is expected to happen sometime in August this year, and that means that the crypto could be in for a price push driven by the decrease in supply and rise in demand.

In fact, the market is already experiencing some push even before the halvening happens. At the time of this writing, Litecoin is trading at around $135.46, a cool 9.46% rise over the last 24 hours. 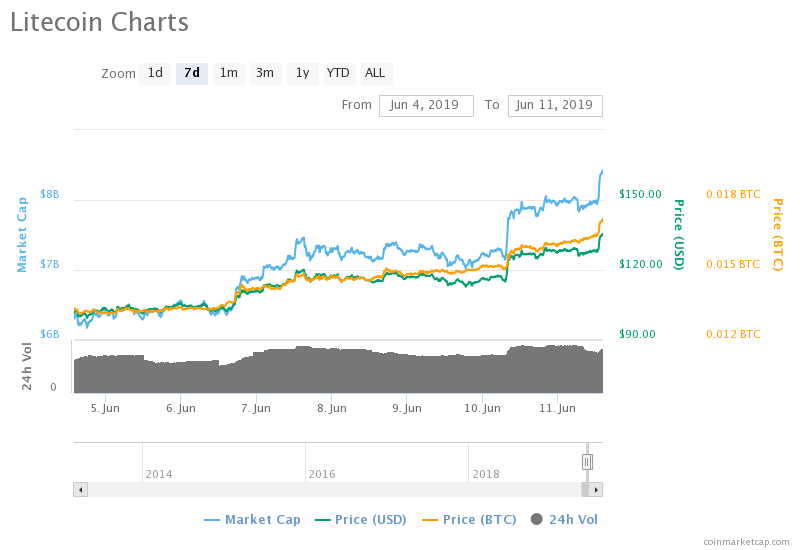 Going on, The Crypto Dog opined that the best time to get into the Litecoin market is now when Litecoin is gaining against Bitcoin. Given the current market situation, Litecoin looks set for a higher price in the near future.

Besides being influenced by the coming halving of its own, Litecoin’s price is also subject to influence by Bitcoin’s block halving expected to occur in May 2020. Bitcoin has been on the surge, dragging up the rest of the market with it, and that also affected Litecoin’s price. As such, Litecoin has expected a double push.

The tweet by The Crypto Dog didn’t go unanswered. Various Twitter users offered their opinions, with some supporting the notion that Litecoin has a good utility that could take its price higher.

However, there are those who still feel that the break out might be fake and that Litecoin could still dip down to $110. However, there are indications that the crypto is actually preparing for something huge – if the recent and current surge is anything to go by.