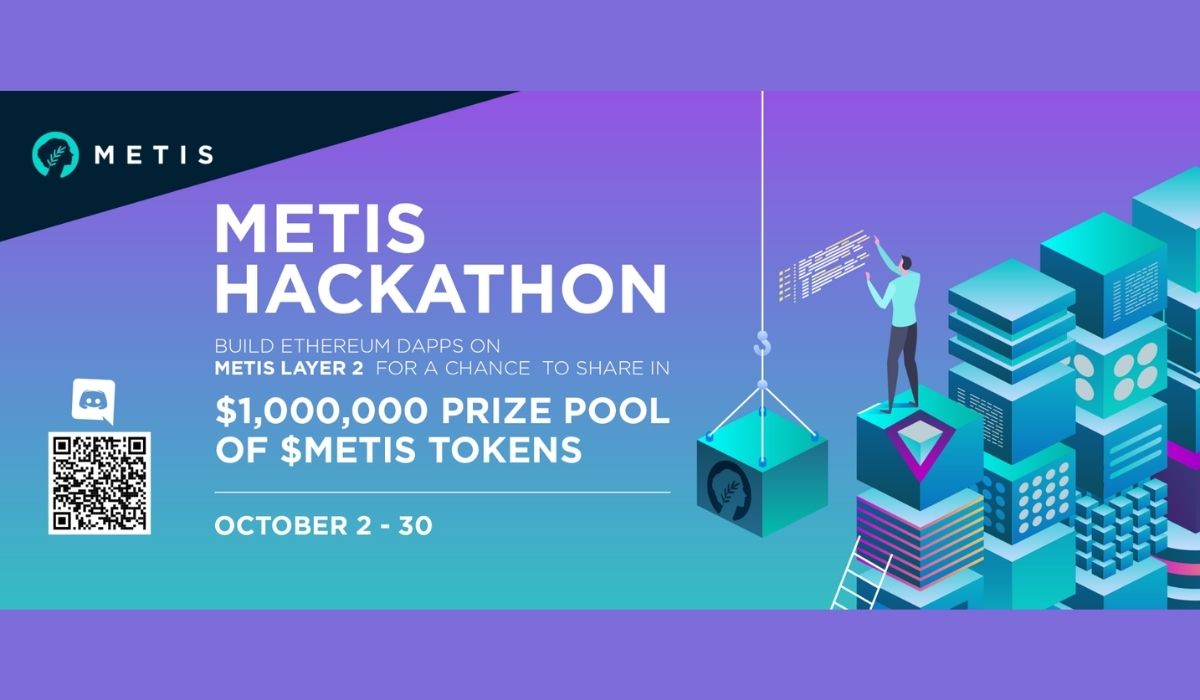 As cryptocurrency becomes an increasingly popular destination for prospective investors, scalability and efficiency are starting to come to the forefront of the community. Higher traffic has in turn led to increasing gas fees and errors with transactions. Due to this, many new projects are now choosing to build on top of existing chains to solve the underlying scalability problems.

One such project is Metis. It is a layer-2 Ethereum based protocol focused primarily on addressing many of the problems facing the network as well as introducing new features to it and promoting ease of access.

The Ethereum-based network has recently announced that it will be holding a hackathon which will begin and end on the 2nd and 30th of October respectively. The hackathon is just one of a slew of announcements recently made known to the public about the network’s plans as we approach the end of the year.

The hackathon is in line with Metis’ vision to support the actualization of web 3.0, a more decentralized version of the internet. With the aim of web 3.0 being decentralization, blockchain technology could be a core part of its development and Metis seems determined to be part of the vanguard.

Hackathon Will Have A Million Dollar Prize Pool

The Metis Hackathon will require developers to create proper Ethereum-based decentralized apps(dApps) which must be scalable and efficient. Participants can either choose to create a whole new program or can migrate an already existing program of their creation from the Ethereum network to Metis layer-2. The winners of the hackathon will also be well compensated as the prize pool for contestants is worth a million dollars and will be given in the form of $Metis.

The competition will be open to developers based on Metis, Ethereum, and Polis. According to the Metis website, they will be judged on the following criteria:

While the website does not elucidate further, one can infer that the real-world effects of the program will be a major determining factor in how well it is graded. As environmental impact is also a criterion, it becomes evident that programmers looking to do well in the competition must find a way to make sure that their prospective program is ‘green’. Social and economic impact implies that profitability and usability will also be major factors.

For developers looking to do well in the hackathon, the use case of their programs will be very important. Participants must ensure that their dApps have application in the real world. The apps must thus target an existing problem and provide a proper solution to it. This is a central concept to any blockchain team looking to be taken seriously and is usually contained within its whitepaper.

The problem-solving ability of the dApp will also be rigorously tested. While the use case is very important and central to the dApp, it must also solve whatever problem it highlights efficiently. Consequently, the participants will be graded on how well their program can work on whatever problem it aims to solve.

Clear Walkthrough Of Solution With Technicalities

The ability to solve the problem must also be backed by a coherent explanation of the solution with technicalities surrounding the program being properly explained. Such a concise explanation will allow people other than the developer to fully understand the program.

Finally, every project brought forward must have a team with a vision behind it. Each team is also expected to have ample and well-supported information about them available for perusal.

Metis will be on hand to guide participants. Workshops and tutorials as well as technical support will be provided. The Metis tech team will also host weekly meetups with participants.

Although it is relatively new in the crypto sphere, Metis seems to have made a massive splash in a densely populated pond. Announcement of the hackathon as well as the impending introduction of the public testnet and mainnet shows that the team is here to stay and has the drive to do so.

The Ethereum-based protocol seems to have a lot going for it. It aims to provide the security and assurance that comes with trading on the Ethereum network while also solving a lot of the problems plaguing it. Problems such as high gas fees, slow transactions speed, and ease of use are just a few of the things that Metis already aims to solve.