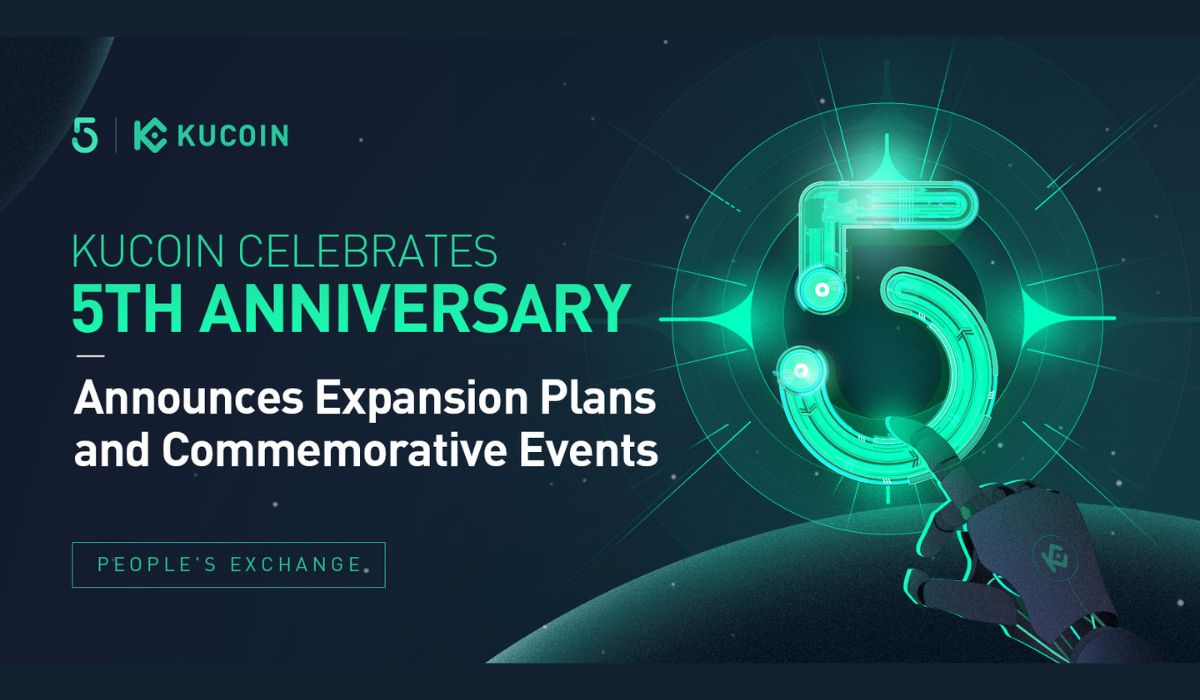 KuCoin – a global cryptocurrency exchange, is celebrating its fifth anniversary, announcing several events, and thanking the community for its ongoing support. The jubilee is also marked by the release of a new development strategy that will see the exchange go global and accelerate efforts at penetrating Web3 space.

The approach to globalizing the adoption of cryptocurrencies is at the forefront of KuCoin’s activities. The exchange intends to accelerate the development of its global reach by hiring an additional 200 employees, who will be based in newly opened representative offices in Hong Kong, Bangkok, Singapore, and Dubai. This step will mark the transition of KuCoin from a fully digital exchange to a physical, legal entity for upending user trust and regulatory compliance.

KuCoin’s new strategy also solidifies its position as a safe financial environment. The development of a comprehensive approach to operational realities and related regulations in real-time will provide users of the exchange with unrestricted access to digital assets.

Because KuCoin grew from a team of five co-founders to a workforce of over 1,000 people in under five years, it is testimony to the platform’s attractiveness for its 20 million users across 200 countries. With over 700 listed assets and 1,200 trading pairs, KuCoin has a cumulative trading volume of $2 trillion and the highest single-day trading volume exceeding $30 billion.

The title of the “People’s Exchange” was attributed to KuCoin for its user-centric approach, which entails deploying a vast variety of products to cater to any demands on the part of the community. Among the services and products currently available on the platform is the Trading Bot automatic trading function, Spot Grid, Dollar-Cost Averaging (DCA), Futures Grid, Smart Rebalance, the Bitcoin Mining pool, and Infinity Grid.

New product releases are playing an important role in cementing KuCoin’s efforts at bootstrapping user involvement. The release of the Wonderland interactive NFT launchpad and the Windvane inclusive, decentralized NFT marketplace in 2022 was further bolstered by the launch of the holistic native KuCoin Wallet. Combined, the multi-chain products provide users of the exchange with instant access to Web3 applications and services within the framework of a single platform.

In order to thank its community of 1 million users across 23 language communities, KuCoin is launching several engaging events starting September 28, 2022. Trading-related events will include the BTC/ETH/KCS purchase option with a 10% discount and Limited Edition NFTs. Mystery Boxes will be handed out to users as well, giving them the chance to win items of two rarity levels and a chance of being whitelisted on the Windvane platform.

More community-oriented events include the My Crypto Story with KuCoin, allowing users to share their stories and content for a $2,000 piece of the $20,000 prize pool. Voters will also be rewarded for their involvement with a chance of winning a share of a separate $5,000 prize fund. Lastly, a Web3-related event will be launched in the form of KCC Beowulf – a 7-week interactive activity involving more than 20 projects deployed on the KCC.

It’s also known that KuCoin held a big anniversary party in Singapore on September 27, with over a hundred people participating. Now the exchange is determined to continue its scaling efforts and expand from a fully digital exchange into a go-to digital asset trading platform on the global regulatory level. Introducing new products in a bear market is a testimony of the exchange’s perseverance and adherence to the selected course of action based on scaling and attracting new users.