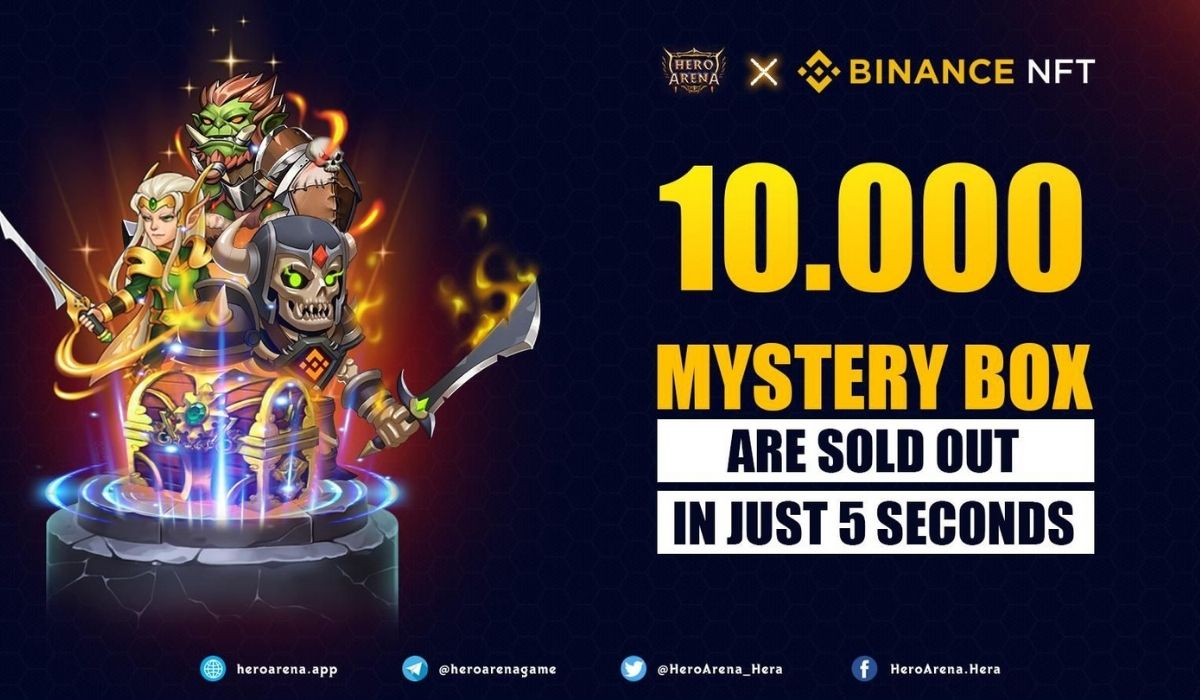 After putting pen to paper collaboration with Binance NFT, Hero Arena has taken another major step towards growing its GameFi ecosystem. The upcoming play-to-earn game protocol successfully conducted its first Hero Arena Mystery Box sales event. 10,000 Hero Arena Mystery Boxes which were earmarked for the event were snapped up by buyers in barely 5 seconds.

“Wow, so excited. I have never seen a project selling boxes very fast like this. Anyone could buy it? Sell for me, please…”, Hero Arena tweeted happily.

The event’s duration lasts 3 days, but all boxes have been successfully sold out in just 5 seconds. So. many players regret not being able to buy Hero Arena Mystery Boxes.

This collection is directly designed by Hero arena for Binance only. The characters are inspired by the Binance Logo and are unique and outstanding.

The collection is designed exclusively for the Binance community with a limited number of only 10,000 Boxes. 10,000 Boxes will open up 10,000 Heroes of 5 races included in games like Warlord, Orc, Elf, Beast, Undead.

NUMBER OF EACH MYSTERY BOX SALE ON BINANCE NFT

Just only $50 for a Hero Arena Mystery Box

Participating accounts were entitled to a maximum purchase of 20 boxes. Each box contained 1 NFT which was either Hero Arena of varying rarities, special characteristics.

Lucky players who open NFT Immortal will be able to participate in the lucky draw to receive $100 (limited to 100 slots).

The lucky draw will be open at the end of the sale box on Binance NFT.

Hero Arena game has been released for 1 month, the game enjoyed by many gamers through many outstanding features. The Hero Arena team has been doing research and developing its ecosystem. However, the protocol’s core mission remains to create a consensus metaverse of solid engagement with community members to build a solid P2E game. With the game’s launch on the horizon, we expect to witness an entertaining P2E experience on BSC.

Hero Arena is a role-playing game (RPG) protocol on the Binance Smart Chain. The protocol enhances user experience through its IDLE campaign which enables players to earn rewards without spending so much time online.

Visit Hero Arena via these links: