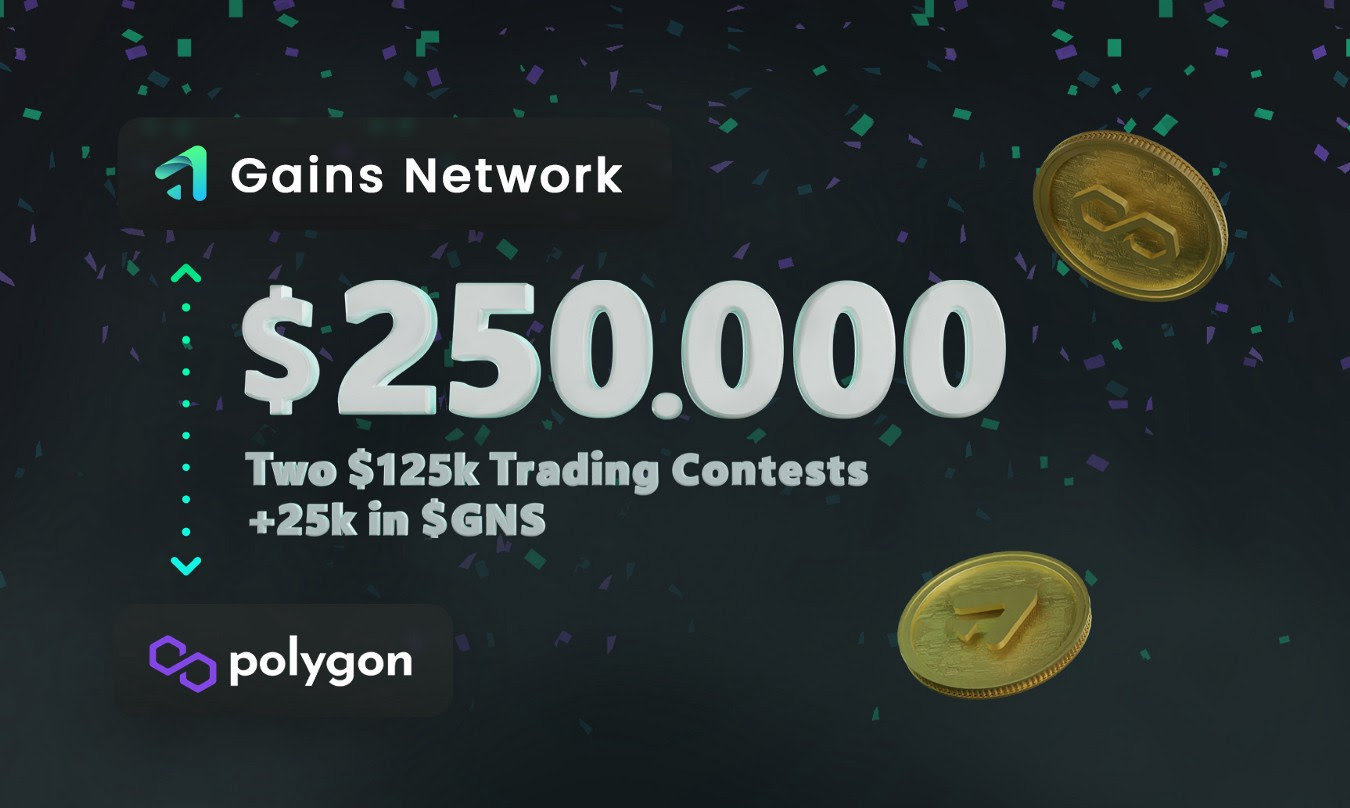 Gains Network, the creator of next-gen decentralized leveraged trading platform gTrade has unlocked $250,000 to grow the network. This is part of a $750,000 grant the network has applied for from Polygon to enable it to grow the platform with a goal to make gTrade and Polygon the go-to destination for decentralized leveraged trading on the blockchain.

“It is a great pleasure for us to work with Polygon for this trading incentives program. Gains Network’s mission with gTrade has always been to give an innovative, decentralized, and fair solution to leveraged trading. It is now time for the world to realize that Polygon is THE blockchain to trade with leverage!” Gains Network Founder said.

The grant is to be used to hit the next two major milestones for gTrade. The initial $250,000 budget in MATIC will enable Gains Network to hit 4 major targets over the next two months. The targets include:

The first target has almost already been reached through organic growth while the last two have already been attained. Recently, gTrade has grown in an unprecedented manner, making it feasible for these milestones to be achieved as at when due. For instance, it has already reached an average of $20 million in daily trading volume, and an $18,000 max per-trade collateral, rising from just $6,000 before its DAI vault less than two weeks ago.

There is currently more than $7 million in TVL in GNS/DAI LPs and has managed to reach $1.8 million TVL in its DAI vault only 4 days after its opening. This growth is not surprising though, as gTrade is a super fast and liquidity-efficient decentralized leveraged trading architecture that explores Polygon’s capabilities to bring the best available services to its users.

Advantages that gTrade offers include leverage on median spot prices and the promise of 0% funding fees and 0% price impact. This is made possible because of the unique asset agnostic synthetic trading architecture powered by the minting and burning of its native GNS token.

There are currently 43 cryptocurrencies, with 5 to 150-times leverage and 10 major Forex pairs with up to 1000-times leverage, with a fully on-chain architecture. Trades are executed using the on-demand Chainlink Decentralized Oracle Network which offers traders the best possible prices averaged from multiple exchanges. Its unique feature is that it does not require liquidity for every trading pair, but rather liquidity for settlements on all trading pairs is backed by the GNS/DAI pool and the DAI vault.

With $250,000 already in use to grow the network, Gains Network still requires an additional $500,000 to get the network ready to handle thousands of users and hundreds of millions in volume. The next milestones to be reached with the remaining grant are $100 million in daily trading volume for at least 10 days, $50,000 max. per trade collateral, $10 million in GNS/DAI LPs, and $5 million staked in the DAI vault.

The goal according to the team is to make gTrade and Polygon the go-to destination for decentralized leveraged trading on the blockchain.