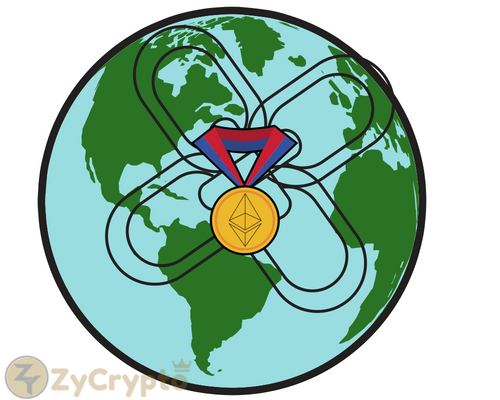 Bitcoin has been on the end of some perceived mockery after China released the maiden list of top public blockchain technologies. Surprisingly, Ethereum claimed top spot while XEM ranked lowest of all in a list that significantly varies from what crypto investors perceive.
The report was released by the CCID Research Institute of the Ministry of Industry and Information technology and represents the first official blockchain index and ranking in China.
An earlier announcement disclosed that the ministry has been working on a scoring device and local news outlet CENA, announced its first release.
Bitcoin may remain the biggest cryptocurrency token by market cap and trading volume but was ranked 13th in the listings generated with three major features of a blockchain in perspective – generation, software, and innovation.

Ethereum at the top of the pile

With a fast block addition time and low transaction fees, sits beautifully with a 129.4 total indexing, a figure that 41.3 less than the Bitcoin total index score.
Ethereum boasts the best application rating, the second highest technology score of 80.3 and an above average innovation score 25.4 amongst its peers.
In the middle placed position, Bitcoin maintained an edge over the 27 listed blockchain in the innovation category, arguably because of being the first demonstration of what a public blockchain is.
That would go on to count for less, with less prominent projects NEO, Komodo, Lisk, and Steem impressively scoring at least 100 total index points.
EOS and Tron were notable absentees from the maiden release even though both are placed in CoinmarketCap’ list of top ten cryptocurrencies.

For one thing, these rankings prove that there is more to crypto tokens than market value and long-term investors would likely consider adding these new results on their trading checklist.
Understandably, Ethereum will gain new followers over the next few weeks having pipped bitcoin to a top spot in a rare occurrence.
China at the other side of the coin has further strengthened its position as one of the biggest supporters of blockchain technology and will look to continue building on this.