The last day has seen the market turn green. All top 20 cryptocurrencies have seen a price surge and for most, they have rallied above key resistance positions. The move has been inspired by the crypto leader, Bitcoin, which is recording one of the highest surges of over 6%.

Ethereum has come close to this, rallying above 5% in the last couple of hours. This makes it one of the best performing altcoins in the market. More importantly, it has seen ETH climb from just above $160 to a little under $170.

A few days ago, Ethereum had slipped back, retesting the $156 support position. Its resilience to avoid dropping below $150 has helped the bulls to remain optimistic and ensure that a bullish move is easily triggered and easily pushed to key resistance positions.

Ethereum To Get Back Above $200 Soon 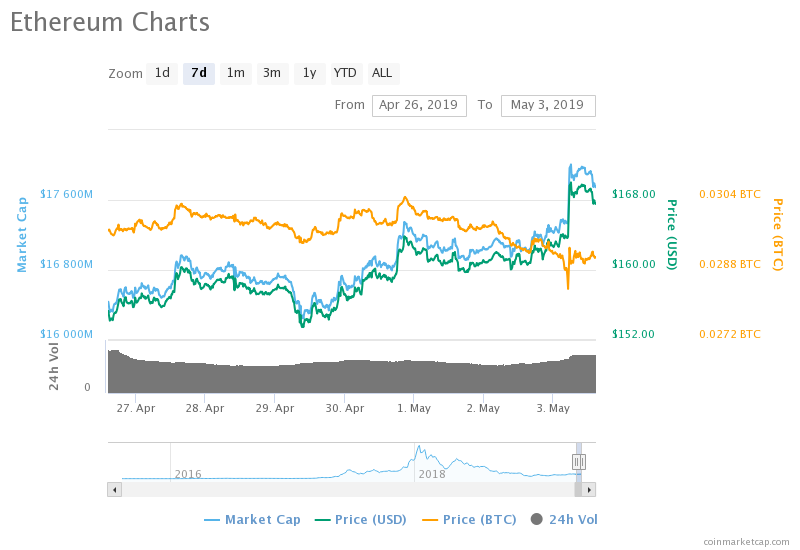 With every move, Ethereum comes close to hitting its year high of $190 and even closer to the coveted position of above $200. Although this could be achieved in the next couple of days if the bullish momentum persists longer, the launch of Ethereum 2.0 further promises to see prices achieve this.

According to a recent report, this is fast approaching with the project already announcing that the code for Ethereum’s Proof-of-Stake Blockchain will be ready as early as next month.

In addition to these, the largest altcoin in the world has received yet another major boost in the last couple of days. A new tool launched by Amazon Web Service will now enable users to “create and manage scalable blockchain network.”

This new tool will allow Amazon users access to Ethereum blockchain further boosting its adoption. This news, at the time, did not impact prices but could in the long term help accelerate prices.

With this recent surge, Ethereum has even further extended its gap between it and XRP which was a few months ago battling it for the number two spot in the market. At the time of press, Ethereum has risen its market cap to over $17.9 billion. XRP, on the other hand, stands at $13 billion. The total market cap is now coming close to hitting $190 billion.