Over the last 24 hours, there has been an overall Bull Run among today’s focus coins. Tron, XRP, and Stellar showed green on crypto-charts with most indicators pointing towards an uptrend in the coming days. Support zones have been upped and resistance areas tested at several instances.

In the markets, investor sentiments are picking steadily. Most coins are in the middle zone which shows market stability and equilibrium. 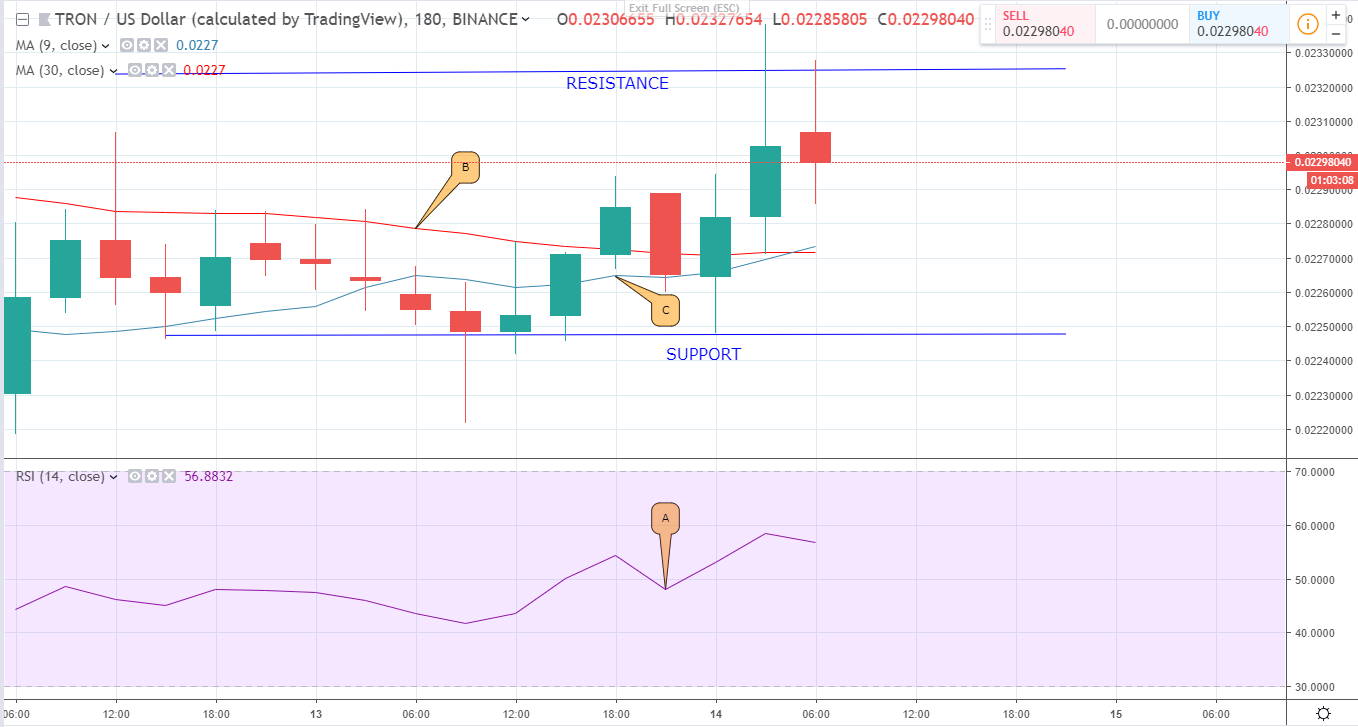 The TRX/USD pair is has gained by 0.95%, having moved from $0.0226 to $0.0227 over the past 24 hours on the 3 Hour charts. The upward rally has been supported by most indicators with the 9-day Moving average (B) currently gravitating above the 30-day Moving Average (C). Also, the Relative Strength Index (A) hit a high of 59 before dropping slightly to 55.

Support has moved up from $0.02247 to $0.02262 which shows a strong bullish movement. Tron sold $145 Million over the last 24 hours and seems set for a Bullish rally. Also, the two moving average are tending towards a contracting triangular pattern which supports the uptrend. 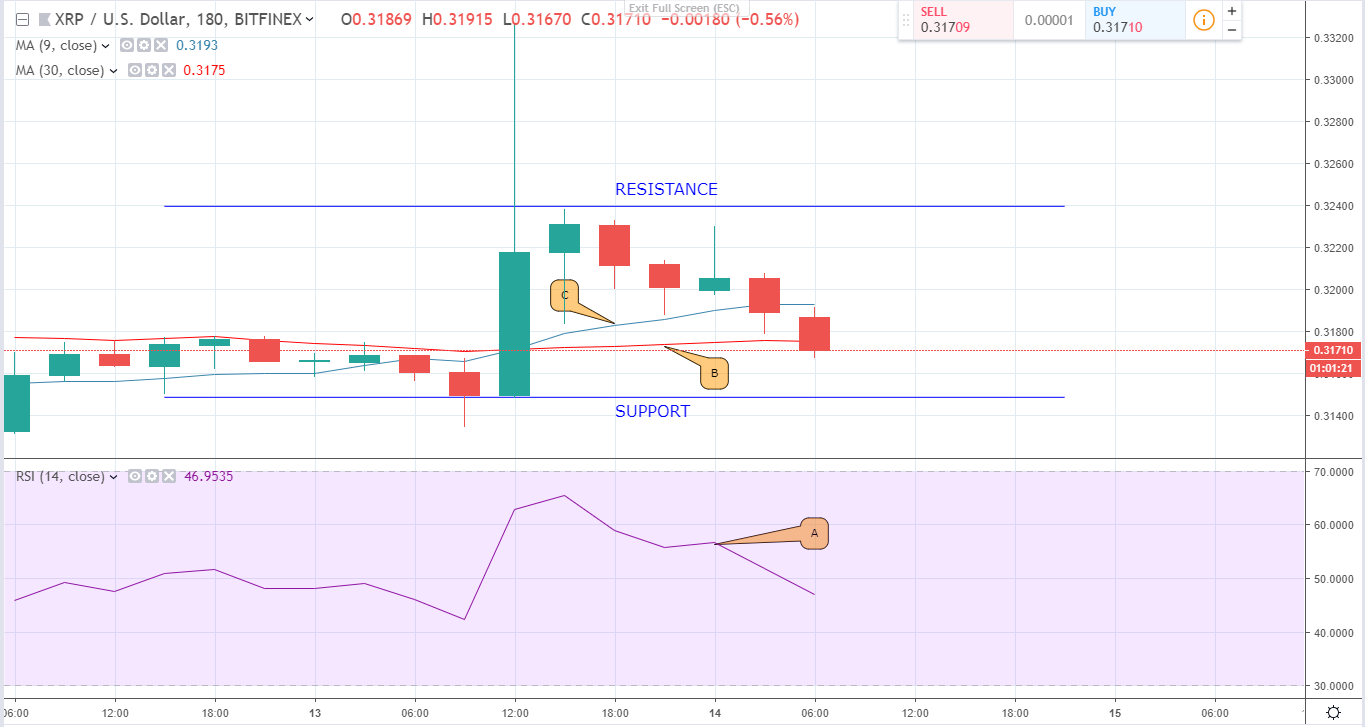 XRP, which currently stands at $12.9 Billion in market capitalization, is down by 0.97% in the last 24 hours. This downtrend has adversely affected the coin’s performance, with most of its investors looking to sell off their holdings. Market performance, indicated by the Relative Strength Index (A) is on a downtrend. This indicates increased buyouts with the RSI dropping from 67 to 30 over the last 24 Hours.

Despite the drop, there is an overall bullish outlook on the chart which signals an incoming Bull Run. The 9 day EMA (C) yesterday crossed over above the 30 day EMA (B) and is currently acting as price support with the two forming a contracting triangular pattern between them. 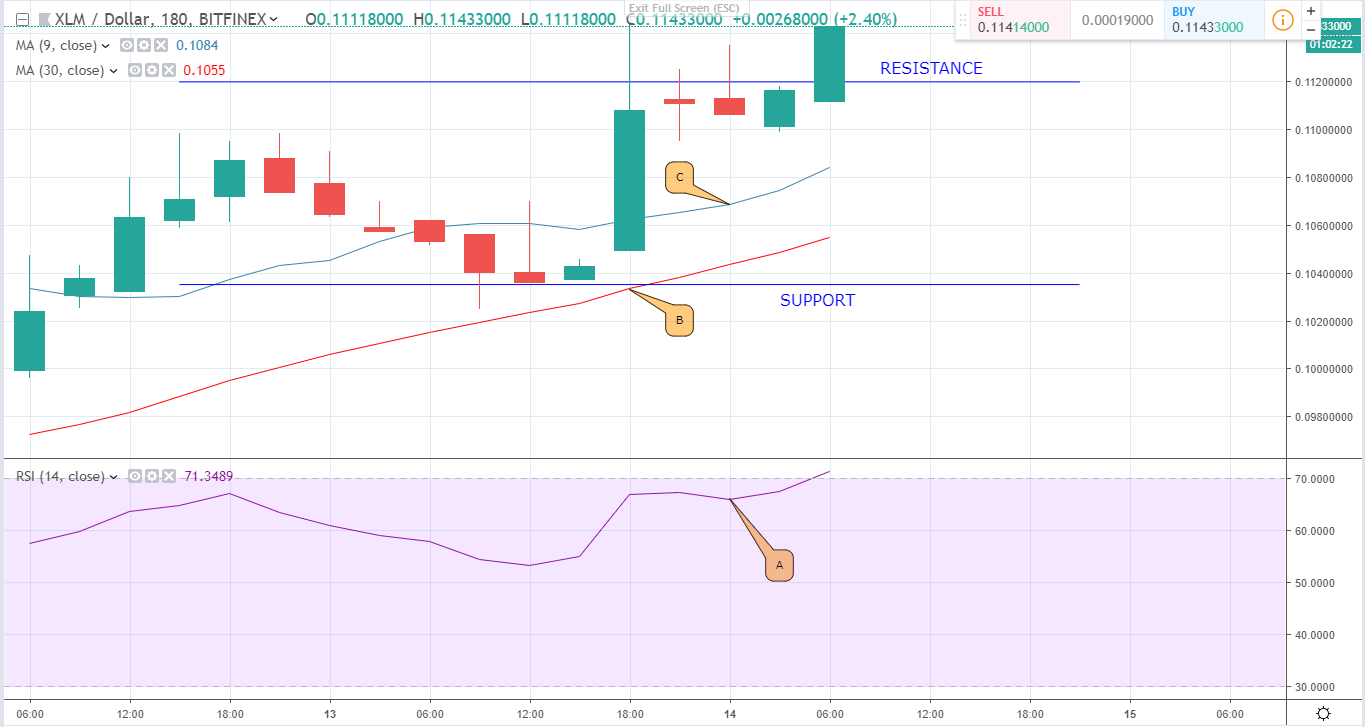 All indicators are pointing towards a bullish outlook for Stellar in the coming days. The RSI (A) is at the ‘under-bought’ area which shows positive investor sentiments.

Both Moving Averages(B and C) are upward facing which supports the Bull Run.