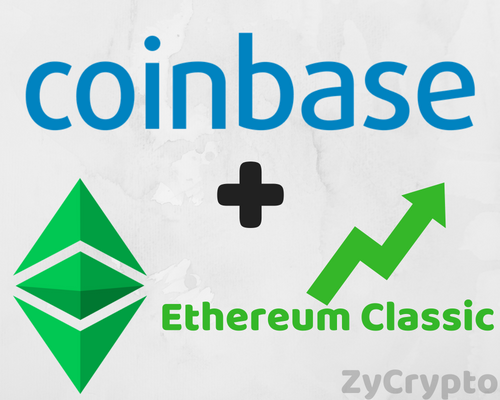 Coinbase to list Ethereum Classic ETC on its cryptocurrency exchange platform in few days. The announcement was made known through a tweet via the Twitter handle of Coinbase on the 3rd of August. Ethereum Classic (ETC) will be available on Coinbase Pro and Coinbase Prime as at August 7th. This is good news for the Ethereum Classic community as more volumes are expected to be traded in coming days with the expectation of the ETC price moving up.

The recent development by the American powerhouse cryptocurrency exchange was made known through its Twitter handle on the 3rd of August. The tweets read,

“Our engineering team is beginning final testing of Ethereum Classic on Coinbase products. We expect final testing to be completed by Tuesday, August 7, at which point we expect to announce that we’re ready to accept inbound transfers of ETC.”

Before the announcement was made on the 3rd of August by Coinbase, the exchange had previously made known their testing of ETC integration in June of this year. The exchange plan is underway presently for Coinbase Markets and Coinbase Consumers to go live with their ETC support after liquidity and stability will be established on the platform.
As the new integration is lining up to boost the value of the Ethereum Classic (ETC) cryptocurrency, Coinbase exchange is still in to list more cryptocurrencies. In July, Coinbase had made its interest also known for integration of 0x (ZRX), Basic Attention Token (BAT), Cardano (ADA), Stellar Lumens (XLM), and Zcash (ZEC) on its platforms. There have been previous predictions of ZRX and BAT as most prime for adoption by the American giant exchange.
For cryptocurrencies to have more liquidity, stability, value and popularity adoption and integration alike is necessary for each crypto, as seen with the rise of Digibyte in the past week with its partnership with UTRUST and some other platforms.
Likewise boosting the image of cryptocurrencies remains the mission of cryptocurrency exchanges such as Coinbase or Binance listing some of the major tokens, making them easier to purchase.
As the cryptocurrency world awaits the approval of Bitcoin ETF, the expected boost, increase in value, the stability that the community awaits is dependent on support and integration.