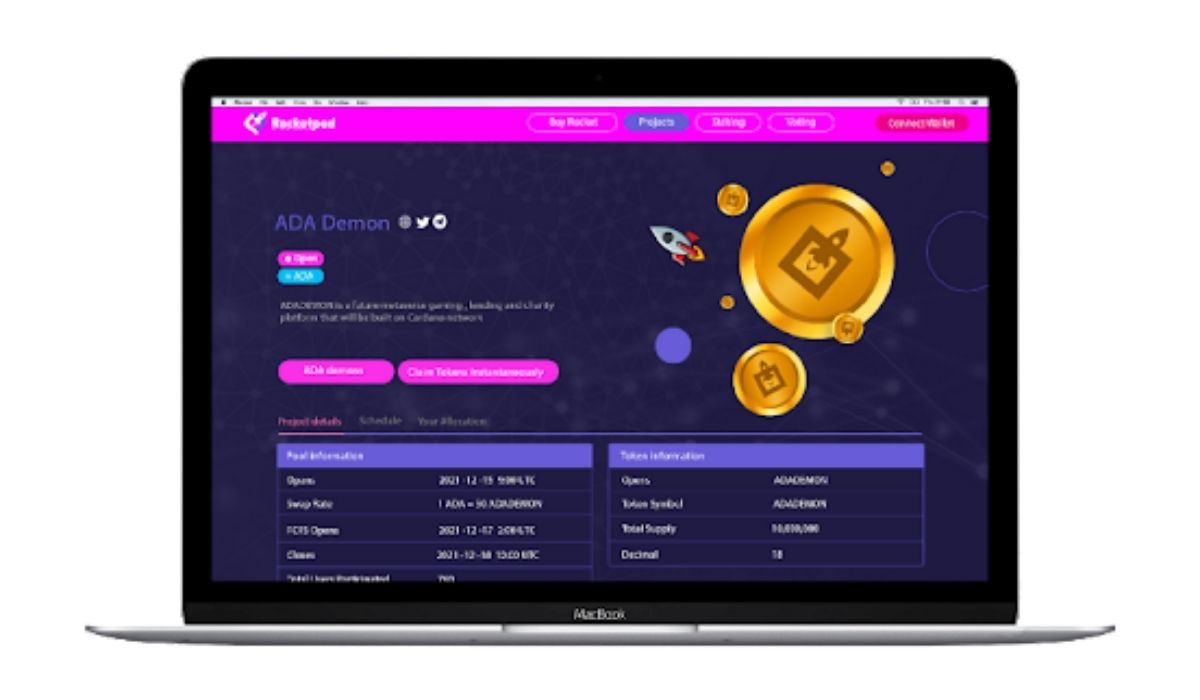 Rocketpad, a Cardano-based fundraising platform, and project accelerator has released a preview of its IDO Launchpad ahead of its actual release. The exclusive front demo showcases a polished user-friendly interface, designed to give the best user experience.

Rocketpad aims at giving its token holders a fair and fully decentralized IDO Launchpad platform, among other features. One of these is a staking feature, which rewards users with additional tokens following staking. The platform also allows users to exchange $Rocket tokens for other cryptocurrencies, enabling them to supply liquidity and a token market. Swappers will have pocket-friendly charges for purchasing $Rocket, while liquidity providers will be paid for their services.

Even more, Rocketpad will be introducing token burning – a rather new concept in the Cardano ecosystem. Token burning refers to permanently removing a number of tokens out of circulation to create token scarcity and a subsequent rise in value.

The most exceptional feature of Rocketpad is the mechanism of a tier-based system that relies on three tiers. This feature places the platform ahead of its competition by enabling it to bootstrap ecosystems, filter out low-quality projects, create an equitable token distribution, and support developers’ dreams. All this is enabled by the platform’s utility token, $Rocket.

Another exciting feature is the platform’s NFT reward system. NFTs have seen great adoption and brought value to the masses. Rocketpad is looking to follow this trend by offering users exclusive rewards in the form of NFTs. Rocketpad will soon announce whether these reward campaigns will be done regularly or occasionally. The latter, however, would be a better option due to the excitement it creates.

The Rocketpad team plans to partner with the Cardano-based developer incubation program Alumni Plutus Pioneer. Rocketpad’s next release will see it inch closer to its Mainnet launch. Already, major blockchain influencers have endorsed the project, drawing compliments for the fast pace at which the Rocketpad ecosystem is growing.

Currently, the platform’s developers are researching wallet-compatible APIs. The team is also looking to put up a static Rocketpad site using an API gateway. Launching in this way will protect the platform from distributed denial of service attacks (DDOS).

The $Rocket token seed sale is live with the sale figure steadily approaching its soft cap. Users of the platform will be whitelisted as per the amount of $Rocket tokens in their wallets. The $Rocket token is aiming toward the $1 mark, following rising interest in the platform and its home network Cardano (ADA). The latter is now the 6th largest cryptocurrency per market value, trading at a price of $1.46 after a 7% hike in the day. All these movements point toward promising investor returns in the near future.

The ongoing seed sale has an allocation of 30 million $Rocket tokens, with 150 tokens going for the price of 1 ADA. The minimum one can purchase is 500 ADA while the maximum is 30,000 ADA. Interested persons can participate by sending ADA to the seed-sale address using any Cardano-supported wallets. Such wallets include but are not limited to Yoroi, Daedalus, Adalite, and Nami wallet.