Cardano is flying high and recording big numbers. In the last 24 hours, the coin has extended its gains from yesterday by more than 15%. Cardano’s surge from the last couple of days has seen it get back into a top ten ranking position and steadily it is continuing to climb up the ranks. At the time of press, the coin is enjoying a solid $2.44 billion market cap.

This number is quickly rising since the coin at the time of press is enjoying gains of over 19%. The coin’s movement looks unhindered in the short term meaning that market cap should be hitting $2.5 billion pretty soon. 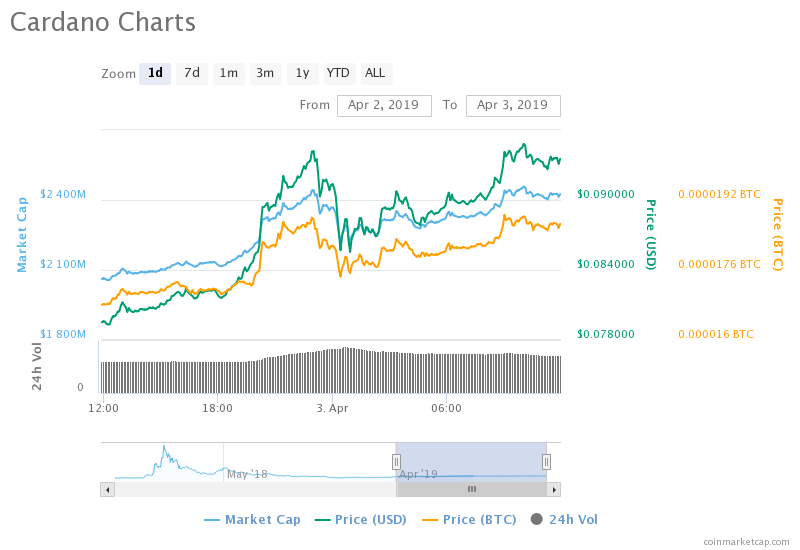 Cardano’s movement poses danger for Stellar which just lost its eighth position to ADA. Stellar is at the time of press recording a market cap of just a little over $2.3 billion.

Prior to the April 02 pump, Cardano was already enjoying some gains owing to the fact that there have been some key developments from the platform. Much of the development has been lining up the network to becoming fully decentralized.

This is expected to ensure secure staking and reliable dapps. This is going to have an astronomical effect on ADA  prices. Even if Cardano does not overtake Binance Coin during this rally, it looks inevitable that soon Cardano will surge past BNB.

As Cardano is over Stellar, next will be Binance coin, but, this will be much harder since there is a cap difference of around $300 million and Binance coin has been on the front foot for the better half of 2019. By every indication, the future looks bright for Cardano and it will be interesting to see its movement during the next couple of weeks.