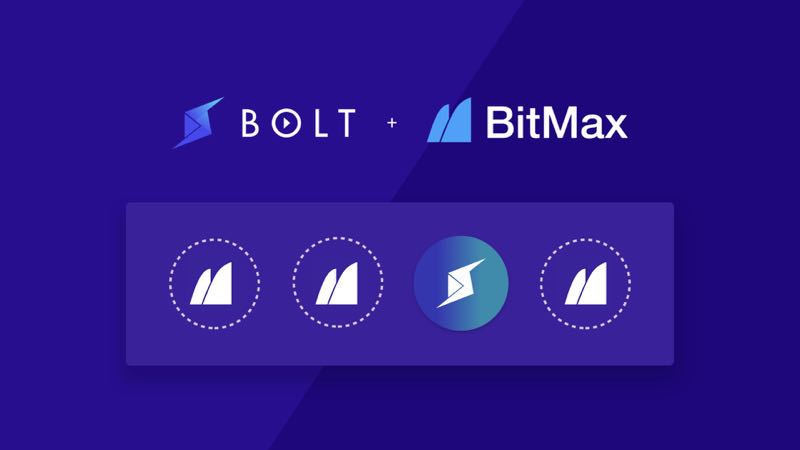 BitMax.io (BTMX.com), the industry-leading next-generation digital asset exchange, has announced a strategic partnership with BOLT, a company whose vision is to be the largest mobile wallet in the world, powered by content. BitMax.io will primarily list BOLT (BOLT) under the trading pairs of BOLT/BTC and BOLT/USDT. Trading will start at 9:00 a.m. EDT on Mar 26th, 2019.

BOLT’s vision is to be the largest mobile wallet in the world, powered by content. Built on Zilliqa, the fastest Blockchain platform, its mission is to democratize the chain between content producers and users.

BOLT has focused their efforts in building token utility partnerships, including hardware manufacturers like Hisense in South Africa (over 6M active devices), partnering with International Cricket Council to broadcast the Cricket World Cup in June 2019, exchanging tokens for mobile data plans with Digi (part of Telenor, with over 11.8M subscribers) in Malaysia, and having an ecosystem of telco network operators around Asia and Africa with a user base of almost 80M users.

The BOLT ecosystem is democratic, enabling secure, direct access between consumers and content producers. Everyone is welcome to participate. On BOLT+, our video streaming service, those who create content can earn tokens from those who view the content. Those who help the community by voting on content can earn tokens as well as those who translate content into another language. Eventually, we will also allow users to trade BOLT tokens for discounted mobile data plan top ups either through direct redemption or bidding on the BOLT Marketplace.

Gluing the whole ecosystem together is the BOLT Wallet, which will be released at the end of Q2 2019. BOLT users will be able to use the BOLT Wallet to top up BOLT Token balances (via telco redemption or external wallet address), send BOLT Tokens to other users, trade BOLT Tokens for access to other parts of the BOLT ecosystem. This access includes the BOLT Marketplace and access to premium content on BOLT+ (interactive video app). Loyal advocates of BOLT are rewarded through user referral programs, or with exclusive access to premium programming that is first to air.

– BOLT has existing Partnerships with hardware manufacturers, telco networks and premium content partners. BOLT has 2 main products – “BOLT+”, a video streaming service, and the BOLT Wallet. The vision is to be the largest mobile wallet in the world, powered by content, and to bring the benefits of the blockchain (security, democratization, and access) to a mass audience.

– BOLT will launch a blockchain ready wallet, “BOLT Wallet” for mass adoption by Cricket World Cup 2019, a global event which will be watched by millions.

– BOLT has integrated with blockchain ecosystem partners such as Zilliqa, Bitmax.io, and Switcheo for purposes of the permissionless blockchain, token trading and token to telco mobile data marketplace infrastructure respectively.

– BOLT’s upcoming global sports events on the radar for 2019 to be enabled by the blockchain includes the Rugby World Cup in November 2019.

Present access to entertainment involves too many middlemen. Mark-ups are excessive leading to higher costs for end-users and content partners don’t have much incentive. Existing social media and video content platforms have high bandwidth consumption that makes them expensive and ineffective in the developing world. Mobile network infrastructure cannot support 4G and 5G. A centralized business model that collects data and sells it to advertisers is becoming increasingly unattractive. Such business models are also unable to mobilize the community to self-sensor and to moderate to community-determined standards.

BOLT is run by a proven network of digital strategists, venture builders and media veterans from some of the biggest companies in the world including Facebook, Coca-Cola, PayPal, Samsung, and Twitter. The team all has one thing in common – the desire to build a meaningful, global movement for the underserved.

Jamal Hassim is the Founder and CEO of BOLT. He is a seasoned broadcast, media and technology entrepreneur. Prior to founding BOLT, he held key management positions in NTV7, 8TV, and the TV3 group. Before this, he was the Chief Operating Officer of SPH Mediaworks in Singapore.

Christel Quek is the Co-Founder and Chief Commercial Officer of BOLT. As a technology executive, she has built brands and digital businesses since the advent of the digital economy. She is also an Advisor to Zilliqa, a next-generation high throughput blockchain platform. Previously, Christel was Head of Content at Twitter across International Markets and led Social Business for Samsung Asia.

BitMax.io is the industry leading next-generation digital asset exchange that provides a broad range of financial products and services to both retail and institutional clients across the globe. This innovative trading platform was founded by a group of Wall Street quant trading veterans and built upon the core values of blockchain, transparency, and reliability, to deliver high-quality client services and efficient trading experience.

The introduction of the trading model that combined “transaction-mining” and “reverse-mining” by BitMax.io is definitely revolutionary in the competitive crypto exchange space where “transaction-mining” can be quite common practice. Transaction-mining rewards platform users with tokens for trading on a platform. However, with “reverse-mining” mechanism, BitMax.io platform users receive not only BTMX tokens as a reward for trading on the platform but also rebates for executing maker trades. Since the launch last November, the combined trading model has proved effective to bring additional liquidity to the platform.

BitMax.io always strives to provide its global users with a comprehensive set of trading products. Its newly launched margin trading function is another step forward from product offering perspective to better serve their dynamic trading needs. For those users who understand and acknowledge the risks involved in margin trading, the function allows users to borrow funds from the platform and to trade more digital assets than they normally could afford. The list of digital assets that can be traded on margin has increased from the initial four to 18 different tokens, even including BTMX platform native token.  Again, this is the pioneering move among all the exchange players, that not only builds upon its progressive BTMX token economics but also expands the utility functions of BTMX, especially with those BTMX under lock-up that can be used as collateral.

Overall margin trading can bring more trading volume and enhance liquidity on the platform. As users have more buying power, they can leverage tradable assets as collateral for potentially high returns on their investment when prices go up. However, they must take the risk of potential losses when prices move down. (The margin trading function of BitMax.io is not available for North American markets.)

With the commitment to listing only top-quality industry products as part of its client-centric strategy, BitMax.io has expanded its global client base to over 110,000 registered users with 40,000 active community members. Over the last few weeks, the team has successfully launched the primary listing of seven innovative new projects and the BOLT listing will be another great one. BitMax.io and BOLT are both dedicated to promoting the broad-based adoption of cryptocurrencies with focus on real-world usability and scalability.