Earlier last week Bitcoin reached an important resistance level of around $8,300 and with many expecting a decisive move to occur, either way, BTC fell in price and even dropped as low as $6,400. 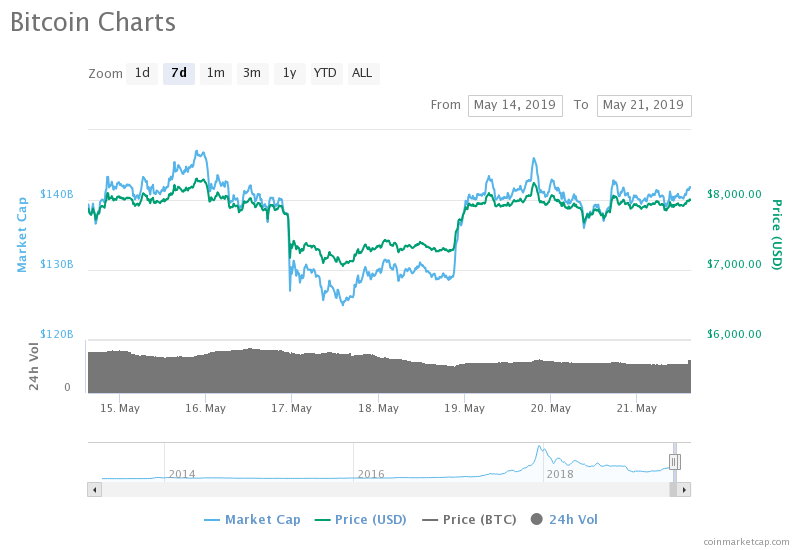 However, what was interesting to observe was just how quick BTC managed to recover when many expected the decline in price to continue.

Twitter user and Cryptocurrency analyst Joseph Young recently tweeted his views regarding the recent drop in price and BTC recovery;

Bitcoin dropped to $6,400 on May 17 triggered by a 5,000 BTC sell order on Bitstamp that led to massive BitMEX liquidations.

Rapid recovery to $8,000 is a testament to how positive the sentiment around the market is currently.

This certainly sparks the question of how the market is currently performing if Bitcoin can recover in such quick succession.

How would Bitcoin react to such a move during a bear market?

Well, the reversal in price certainly would have panicked many investors and we certainly believe the sell-off in BTC’s price would have gathered far more momentum to drive the price further only a few months ago.

But if we take a closer look at what triggered the BTC sell-off, what exactly was the 5,000 BTC sell-order actually due to?

Now the reason why there was a huge sell-off was reportedly due to the Bitcoin CME Futures GAP.

Josh Rager mentioned in a tweet a few days ago;

This is very bullish pic.twitter.com/hYCRMKUj2i

Futures have been around in Bitcoin since 2017 and the big players tend to use the Futures markets to bet on the price of Bitcoin to go up or down.

Now the futures market doesn’t tend to trade 24/7 or open on weekends so if there is a big price movement during those periods then this can result in a gap in price.

The gaps in futures markets often mean that an order needs to be filled to cover that gap. This would then make logical sense as to why price reached the $6,400 region.

The recent drop in Bitcoin’s price and rapid movement up indicates that there were a lot of buyers interest in the $6,400 region which pushed priced back up to its current levels.

A sign to suggest that we currently remain in bullish sentiment.

Those lucky enough to pick up orders in that region will certainly be glad they were given another chance!