The cryptocurrency market as of this time is facing a bearish attack that has plunged down some of yesterday’s highest gainers. The general structure reflects that the bears have possession of about 90% of the top 100 cryptocurrencies as seen on coinmarketcap, most of which are losing between 5% to 7%.

While a few altcoins like Stellar (XLM) have managed to narrowly escape the bears to stay afloat, only 13 cryptocurrencies are recording slight gains, all of which are altcoins and also below 1% at press time. 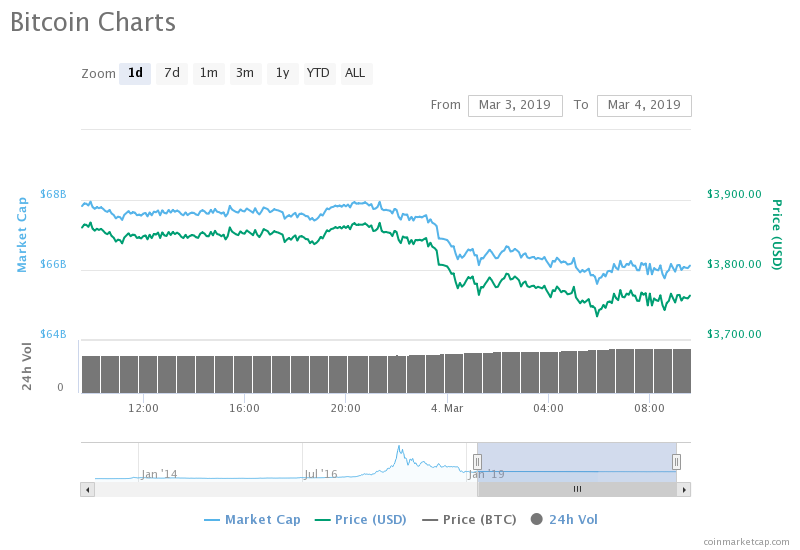 Although this price isn’t far from its closing price of yesterday, BTC has fallen by 2.08% against the USD and might continue to lose momentum if trading volume faces any friction.

On the other hand, With a decline of 5.62%, 5.02% and 4.87% respectively, EOS, BCH and Ether make up for the highest losses obtained amongst the top five altcoins. For Ether, the effects of these losses no matter how big or small continues to make it easier for Ripple (XRP) to work its way up to the second spot. Simultaneously, the trading price will also have a harder time making a breakout to $150 mark.

EOS is also facing the same fate. Despite having reclaimed the 4th spot from LTC, these mild losses put EOS in a very dangerous zone when market cap is considered. Seeing that LTC is only $16 million below EOS’s market cap of $3.02 billion and has only lost some 4.01% against EOS’s 5.75% loss.

BCH has also slumped and lost momentum. Yesterday’s trading price of $133 is now struggling at $125.57 at press time. With 5.19% on losses, BCH and the USDT might have a clash later today or into the week. One that will have one cryptocurrency giving way for the other, as market cap is soon to equalize.