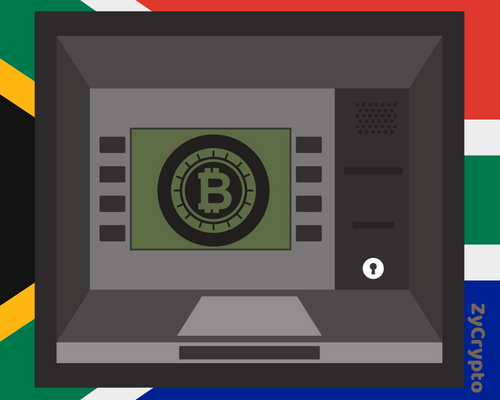 South Africa, one of the places in the continent which cryptocurrencies have gained ground is set to take another shot on launching the first fully functional Bitcoin ATM in the country.
The country had initially launched a similar ATM way back in 2014, but the ATM has since been shut down as a result of lack of interest at the time.
Between 2014 and now, there has been a remarkable growth of interest in virtual currencies. This can be seen with the increased growth of cryptocurrency exchanges in the country which have all recorded high returns in the little time they’ve started operations in the country.
South Africa isn’t the first country on the continent to have a Bitcoin machine installed. Zimbabwe, Kenya, and Djibouti have had their ATMs installed and are fully functional.

Reports show that over 300,000 users were involved in cryptocurrencies towards the end of 2017 when cryptocurrencies majorly came into limelight. Past surveys also have shown that about 47% of the country’s population is willing to invest in Bitcoins and alternative cryptocurrencies.
Fortunately, the idea of launching a Bitcoin ATM despite past failure will drive this into reality with many citizens having one more way to easily own cryptocurrencies as assets, investment, or a tool for micro-payments.

Cryptocurrency Regulations in the Country

Since April 2018, a regulatory body in the country, South African Revenue Service (SARS) released a statement that cryptocurrency holders are subject to pay taxes on gains acquired from cryptocurrencies.
“The onus is on taxpayers to declare all cryptocurrency-related taxable income in the tax year in which it is received or accrued. Failure to do so could result in interest and penalties,” said SARS in their statement.

The Future Of Cryptocurrencies

Despite the FUD surrounding digital currencies causing drastic drops in cryptocurrency prices in the market, there seem to be much more people who want to get a piece of this ‘cryptocurrency’ cake.
This means a lot for the future of cryptocurrencies as the more cryptocurrencies are being adopted, hopefully, by a global audience, we should see a turn around of prices real soon.