Altcoins have waited patiently for a time when they could experience a season like Bitcoin’s. While the season is fast approaching according to some analysts, Tron (TRX) may be getting the opposite of what is to come should an alt season actually be on the way.

A cryptocurrency trader known on Twitter as Moon Overlord says the 12th largest cryptocurrency which has returned to the top 10 many times without retaining the spot shows signs of an impending crash that will take away 50% of its worth as TRX is about to break its “last and final support on HTFs”.

Not the first warning, probably not the last

Moon Overlord had said in another Twitter post on 25 July that TRX was about to lose 70% of its worth because it had no single support on the chart at the time. He, however, wonders what is holding the cryptocurrency from experiencing the crash that looks imminent. 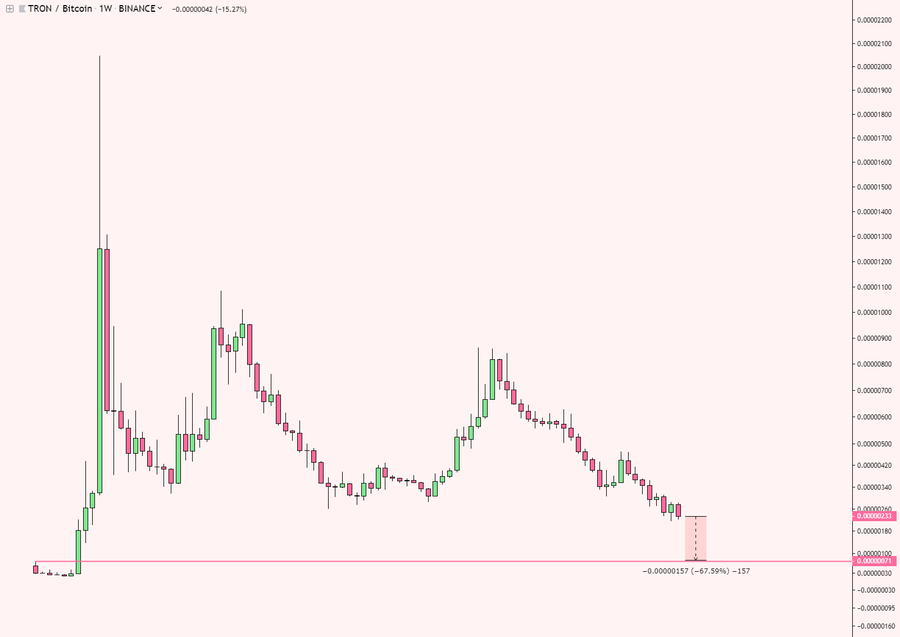 It is unknown what is holding TRX from plunging to new lows given it has no major support left. It is also unknown if the crash will eventually happen but this might be a signal to TRX holders despite the rising hope for an alt season.

The CEO of Tron, Justin Sun has had his fair share of trouble recently so a crash as huge as 50% for TRX could only add to his headaches. The 29-year old who had secured a lunch date with veteran investor Warren Buffett recently canceled due to an investigation from the Chinese government and a warning not to participate in the lunch. The cancellation was also due to his health condition as he is reportedly suffering from a Kidney stone infection.

Apart from dashing Sun’s dream of going down in history as the one who convinced Buffett to go into crypto, he will have lost almost $5 million if the lunch doesn’t happen eventually. TRX seems to be doing okay up to the time of writing this article though as it still holds a marginal gain of 0.33%.

Things could be going bad for TRX in no time if Moon Overlord is right, but TRX holders had better hope whatever is holding it from plummeting further continues to do so or they will need a new approach for the expected alt season.