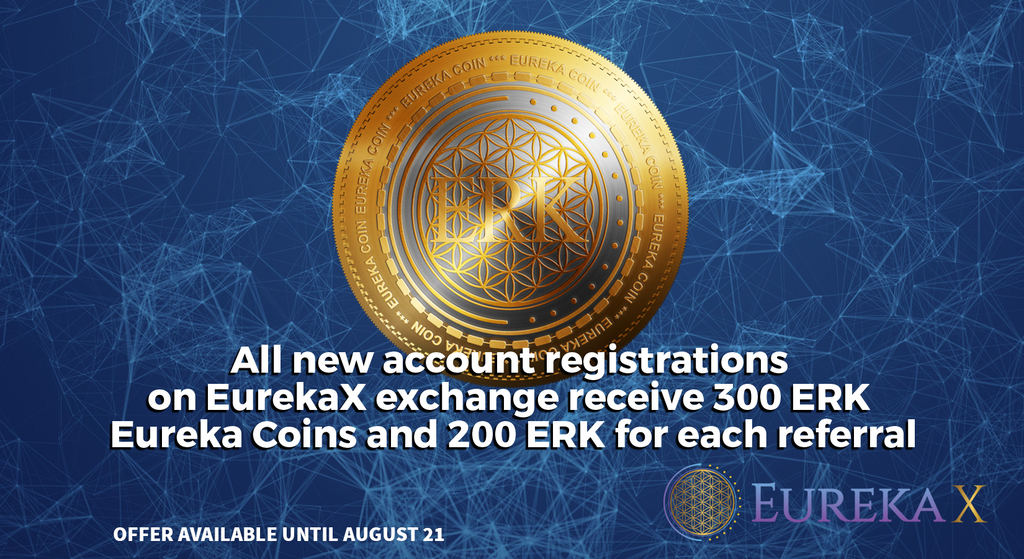 EurekaX has announced its set to launch a new and upgraded version of its cryptocurrency exchange and new users who sign up on the platform before August 21, 2019, will be rewarded with its native altcoin, EurekaCoin (ERK).

The new EurekaX platform is designed to solve the liquidity issues plaguing the cryptocurrency ecosystem. For the crypto newbie, liquidity simply refers to the ease with which cryptocurrencies are bought or sold.

The centralized EurekaX exchange is built to become the highest liquidity exchange in the world by linking its order book with that of leading crypto trading venues like Binance and OKEx.

If all goes as planned, trading activities on EurekaX will begin on August 21, 2019, and the team says it would list all tokens built on the Eureka blockchain network, on the exchange.

As stated earlier, all users who register on the platform before August 21, 2019, will receive a whopping 300 ERK tokens.

ERK is powered by Eureka’s proof-of-stake (PoS) network and several platforms are looking to leverage the network’s ERC20 and ERC22 tokens to build their projects.

Notably, the Eureka network is powered by both the Ethereum and Bitcoin blockchain, making it more cost-efficient to deploy, open-source and allowing other projects to use it in creating their own PoS tokens.

Interestingly, unlike the Ethereum network where miners get all the transaction fees, projects built upon the Eureka network receive the rewards.

Also, the Eureka team is planning to launch the EurekaDEX decentralized exchange in Q4 2019 and it will launch a token buy-back program which will enable it to use 50 percent of all profits generated to purchase and burn ERK.

The token buy-back program is expected to increase the value of ERK, as there is only 150 million ERK in circulation.

Asides the 300 ERK bonus its offering new users, traders who refer new users to the platform before August 21, will also receive 200 ERK tokens until he first 100,000 users join EurekaX.

Investing In 2020: Here Are The TOP 5 Directions

Alt-Banking Has Arrived, Tap Into The Future