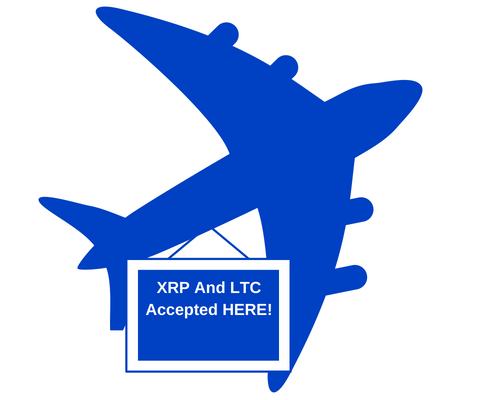 A poll conducted by an American based aviation company, Tapjets shows a vast interest in passengers wanting to pay flight fares using cryptocurrencies.
The poll was conducted to choose between three; Ripple, Verge, and Litecoin. Results of the vote show people are willing to pay using Ripple and Litecoin, compared to Verge.

Our #cryptocurrency friends asked for their project to be included in our payment methods. Our CEO @EugeneKesselman promised a quick poll from the product team so here it is #XVG vs #XRP vs #LTC what should be our next move #FLYTAPJETS

Results had Ripple in first place with a 44% advantage, followed by Litecoin in second place with a 21% advantage, Verge trailing behind with 21%. The poll had over 57k participants.
The company, giving a final verdict based on the poll said:

“People have voted, and we have heard their feedback. TapJets will proceed to the technical evaluation of Ripple (XRP) and Litecoin (LTC).”

From this response, it’s clear Tapjets has technically eliminated having Verge among the list, but it’s not still sure that both Ripple and Litecoin would be accepted at this time. After the evaluation, the company intends implementing support for these cryptocurrencies from the 1st of June 2018 as they are already in communication with the team behind Litecoin and will reach out to Ripple soon.

“Some of this activity would depend on how agile development teams of XRP/LTC are to our requests. It is our goal to allow TapJets clients to use these alt-coins on June 1, 2018. We have been in contact with LTC team already and will be reaching out to XRP team on Monday.”

The founder and CEO of Tapjets, Mr. Kesselman, had promised that the company has plans to integrate more cryptocurrencies shortly. Though Verge is temporarily dropped, it’ll be added in no distant time.
What This Means For Ripple, Litecoin, and The Company
With millions of people flying across the United States on daily bases and a good percentage patronizing the services of private jet owners like Tapjets, cryptocurrency is about to receive this massive adoption we’ve been expecting for a long time as demand is sure to increase.
For the company, those who have made massive profits from altcoin trading probably looking for where to spend their earnings now have another way to spend their profits, bringing increase to Tapjets customer base.
The Future Of Aviation Companies and Cryptocurrencies
Tapjets has paved the way for other aviation companies to support cryptocurrencies as well. In coming years, it’s possible to see big commercial brands like the Virgin Atlantic accepting cryptocurrencies as well.