Bitcoin is on the verge of setting a price record that every holder has been expecting in the last couple of weeks. For the first time since November, Bitcoin is expected to climb above $6,000 in the next couple of hours.

This psychological resistance position has eluded the coin for months, seeing many cast doubt over whether it would ever get above it. This sudden move comes after a bearish weekend and slow start of the week for the coin.

During the bearish wave, Bitcoin backtracked to a little under $5,700 before bouncing back above it. The dramatic surge has also seen Ethereum (ETH), the largest altcoin by market cap record gains in double digits. 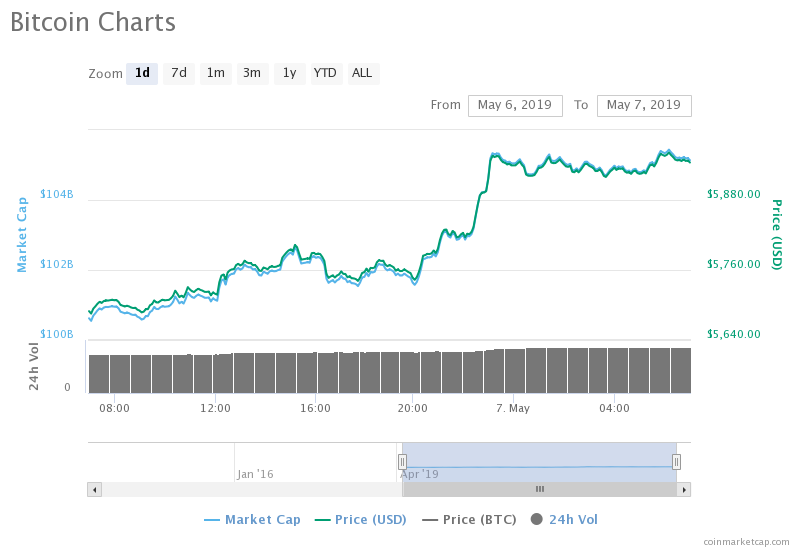 At the time of press, Bitcoin is up by nearly 5% and is exchanging for $5,950. During the last couple of hours, the crypto leader has hit as high as $5,970. However, resistance has seen it slow down to its current price. In the next couple of hours, with the bullish momentum intact there is no doubt that Bitcoin will hit $6,000.

Ethereum Triggered The Rally, Here Is Why

The recent surge according to some reports could have easily been triggered by Ethereum which is in itself enjoying massive gains. The  U.S. Commodity Futures Trading Commission (CFTC) is reportedly considering to approve an Ethereum futures contract.

This could see the market receive new institutional funding, pushing prices up. The hype surrounding this approval could have easily triggered the price movement and this is evident in that Ethereum is one of the highest gainers in the market.

At the time of press, Ethereum is up by 10% and exchanging for around $177. Other altcoins are at the time of press recording moderate gains of around 2% to 4%, this price movement has seen the total market cap value climb to $188 billion.

In the next couple of hours, Bitcoin will be looking to achieve its $6,000 target and though the current momentum does not look sufficient to see it stay above it, setting a high resistance and support position, the bulls will not shy away from trying. A high resistance of around $6,100 is about what the coin would need to ensure it remains above $6,000 if a correction is to take place.