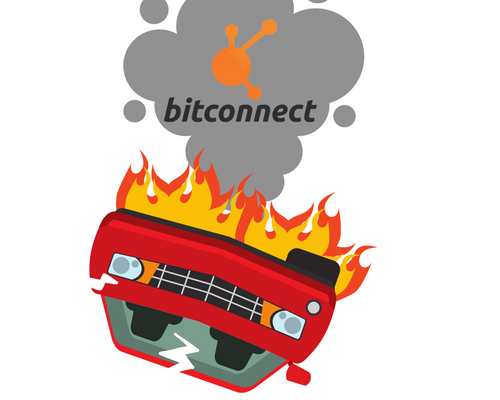 Bitconnect (BCC), a cryptocurrency, crashed last week on Tuesday amid accusations of being a Ponzi and after being given a cease and desist order from Texas securities commission.
The Bitconnect price dropped around 90% and on CoinMarkCap BCC dropped from around 20th place to 80th place  within days. The BCC price was around US$400 and dropped under US$17 within no time. As of today the price is listed as US$18.64 on CoinMarketCap and is at 127th place.
The BCC platform released client’s money from its lending platform and promised to allow exchange of BTC to recover funds. This promise, however, did not seem to stand up because many users reported that when they tried to exchange BCC to BTC that a notice came up saying the exchange was currently down. The users were only able to exchange the coins after the BCC price further dropped and thus lost more money than was necessary.
Various Bitcoin analysts have accused Bitconnect of being a Ponzi scheme. Some of the more notable analysts include Ethereum co-founder Vitalik Buterin and investor Mike Novogratz.
The shutdown of Bitcoin’s lending scheme seems to confirm many people’s suspicions that the platform was a Ponzi scheme. Many supporters of BCC thought the platform would last because a new exchange called BitconnectX was created and a recent conference in late 2017 promoted the ongoing success of the BCC enterprise.
The Bitconnect platform seemed highly unsustainable because an investment of $1,000 would make $50 million in just 3 years. These high returns were created because the BCC lending platform allowed clients to gain compound interest from their investment.
The BCC affiliate program stood out particularly because there were many notable YouTube bloggers who would regularly promote the service. Many of these bloggers would show screenshots of their earnings from the service but many critics would point out that these profits often came from the affiliate program rather than from actual BCC profits. One notable affiliate of BCC was Trevon James who continues to support the platform and even suggested people buy BCC coins while it was falling.
Many people despite suspicions of BCC being a Ponzi scheme still invested in it because they pondered whether it could be a sustainable Ponzi scheme. Some wondered whether it could be a Ponzi 2.0 that could work despite its unscrupulous origins. One critic of BCC being SunnyDecree was open about his distrust of the platform but still invested in the lending platform and reported large losses in the aftermath.
Bitconnect is not the first cryptocurrency to be suspected of being a Ponzi as this has happened before with OneCoin which also used anonymity to hide its true operations. Ponzi schemes seem to be an ongoing concern with the cryptocurrency market because they can be created with little accountability.
What’s your say on the platform ?, is Bitconnect really a fraudulent ponzi scheme or just Accusations ?, Let us know below in the comment box.