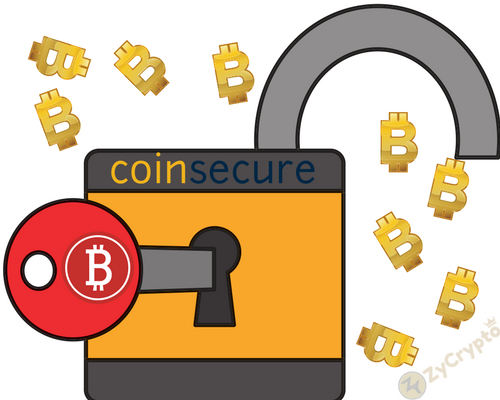 Indian Exchange Coinsecure reports a “cyber robbery” of 438 BTC. CSO may be involved
A few hours ago, the Indian Exchange Coinsecure reported the loss of approximately 438 Bitcoin from its coffers. This equals roughly $3,550,000 according to current figures at a price of $8126 per Bitcoin.
In their F.A.Q. Section they state that the loss of funds occurred when Dr. Amitabh Saxena, Chief Security Officer of the Exchange, extracted the private keys from the company’s BTG wallet:

“Our system itself has never has been compromised or hacked, and the current issue points towards losses caused during an exercise to extract BTG to distribute to our customers. Our CSOm Dr. Amitabh Saxena was extracting BTG and he claims that funds have been lost in the process during the extraction of the private keys.”

The very wording of the letter shows that the company does not believe Dr. Saxena’s allegations to be true, indicating that they have already issued a formal complaint to the authorities asking to investigate the case thoroughly in order to restore the lost funds and punish those responsible:

AN FIR has been lodged with the Cyber Cell, Delhi (copy of the complaint enclosed), and we have expert investigators already on the case.

We are working round the clock to restore our services and to try and recover all the lost funds, and we shall keep all our users posted on the outcome of the details to ensure utmost transparency”.

Upon reviewing the report, the company made it clear to the authorities that they believe the theft could have been an inside job, incriminating the CSO as a possible party responsible for the loss of the funds, since only he had access to the private keys besides the CEO Mohit Kalra, who personally contacted the authorities:

“As the prívate keys are kept with Dr. Amitabh Saxena, we feel that he is making a false story to divert our attention and he might have a role to play in this entire incident.”

They also request the revocation of his passport given the fear that Dr. Saxena will leave the country with no sanctions. So far there is no information on the whereabouts of the accused or any position on his part defending himself against the allegations.
The robbery is significant for this small Exchange, especially if it is considered that according to coinmarketcap data, 24h trading volumes average approximately 3.5 BTC.
The company has been actively working on expanding and improving its services. They had released an app for iOS and Android and were actively working on adding new currencies to their Exchange.
This is a serious blow to the credibility of Indian exchanges that in recent days have had serious problems with the authorities following rumors of bans and criminal charges resulting from fraud involving the use of cryptocurrencies.
No further comments have been made by official authorities until now.