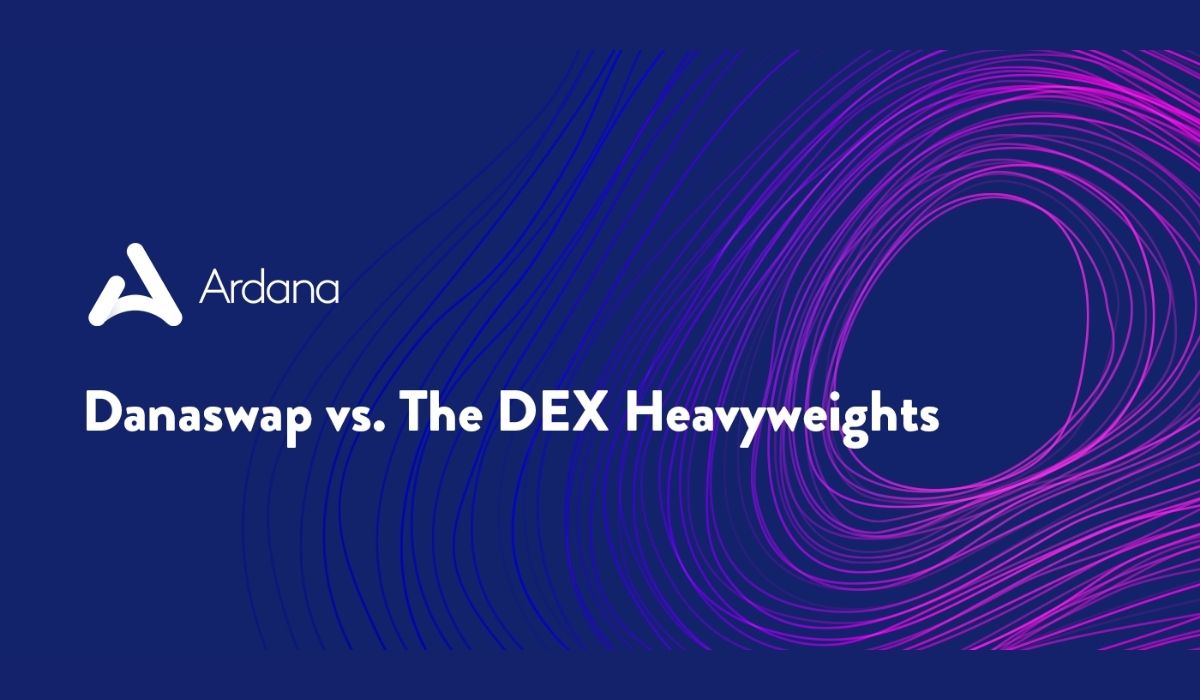 DEXs (decentralized exchanges) have been around for quite some time but really began taking off in 2020 at the start of the DeFi (decentralized finance) boom. But why is this?

For one, DEXs offer a smooth user experience when it comes to trading. Users can also swap between various different tokens on multiple blockchains anonymously through a Web3 wallet. This eliminates the need to undergo KYC (Know Your Customer) verification processes, a central motivation for some in crypto.

Danaswap is a new and revolutionary DEX solution. It offers a seamless and efficient mechanism for trading on the Ardana platform.

In order to better understand how Danaswap fits within the DEX ecosystem, let’s take a deep dive into the product itself and its advanced functionalities before exploring the advantages it has over its largest competitors.

Danaswap is an AMM (automated market maker) designed to support trading and token swaps within the Ardana ecosystem. It consists of stable, multi-asset pools where users can exchange various stablecoins between other wrapped assets.

So why is Danaswap so powerful? To begin, it’s built on the Cardano blockchain, which provides extremely high throughput, low trading fees, and powerful scalability, ultimately making the entire user experience far superior to other DEXs.

Additionally, it provides a wide array of unique features for users, such as:

Danaswap is the key mechanism to bring Ardana and Cardano to the forefront of blockchain technology, demonstrating the true power and viability of ultra-high speeds and efficiencies for decentralized trading.

But, what benefits does Danaswap have over other decentralized exchanges?

For one, it’s much faster in terms of throughput and transaction speed, meaning you can facilitate transactions far more efficiently – the multitude of stablecoin options it offers also allows reduces price fluctuations and maintains the value of your assets.

Additionally, with immense competition emerging in the DeFi space, yield returns have greatly diminished and become less lucrative. Danaswap restores the promise to earn passive income through its pools and staking mechanism, meaning users can generate high yields with confidence.

Given the Cardano blockchain’s eco-friendly design, users can feel confident about reducing their carbon footprint while still experiencing some of the fastest trading speeds at virtually no cost. This is critical in today’s crypto ecosystem, where many of the world’s largest blockchains consume exorbitant amounts of electricity, thereby damaging the environment.

Danaswap is a DEX truly like no other, taking the evolving landscape of trading platforms and interfaces to the next level through its aforementioned features and capabilities.

Uniswap is a popular DEX that was launched in 2018. It runs on Ethereum and the Optimism chain, utilizing an automated liquidity protocol trading model to enable decentralization and security while removing the need for third-party intervention. Multiple versions of the protocol have been released, with the most current being v3.

At the time of writing, it has the largest overall daily trading volume. The platform is open-source, so any developer can copy the code and replicate many of its intricacies. Since its inception and rise to fame, the model has countlessly been copied.

Although Uniswap has amassed a large user base and following, the Ethereum network’s scalability issues, coupled with its high transaction fees, present a major downside to using this DEX and limits its use case.

PancakeSwap is a popular breakfast-themed DEX built on the Binance Smart Chain (BSC). It leverages permissionless liquidity pools to facilitate swapping, trading and staking for users. It was developed in 2020 and quickly gained traction due to its high-interest rates and low transaction fees.

Hundreds of BEP-20 tokens are available for yield farming, liquidity pools, and lottery activities. While it still remains one of the largest DEXs on the market, concerns have been raised over BSC’s security due to several hacks and cyberattacks that have exploited the chain and associated PancakeSwap DEX.

SushiSwap is a sushi-themed DEX launched in the summer of 2020. It is a fork of Uniswap, and therefore uses a similar trading mechanism and user interface. However, it offers a fun environment with more multi-chain trading and swapping features than Uniswap.

Its native token is $SUSHI, which can be used to stake, as a token pair in liquidity pools, and to participate in other activities on the platform.

dYdX is a decentralized margin trading protocol deployed on Ethereum. Traders can use it to borrow, lend, and trade on margin with several popular ERC-20 tokens. It also provides a suite of trading tools for its users based on existing TradFi (traditional finance) applications to help onboard users who aren’t necessarily crypto savvy.

The DEX is entirely run by smart contracts and open-source. It started to gain popularity in 2021, but trading is limited to the Ethereum blockchain, meaning high gas fees and slower transactions for users.

While each DEX has its advantages and disadvantages, Danaswap truly stands out as the flagship solution; it’s the only DEX amongst these heavyweights that can provide scalability and efficiency at never-before-seen levels by leveraging features of the Cardano blockchain.

In addition, it enables swapping between trustworthy and asset-backed stablecoins, enabling greater confidence in the trading experience.

Danaswap is at the forefront of innovation, putting itself ahead of the competition while adding an essential piece to the Ardana ecosystem.