Bitcoin continues to trade below the $9,000 price level and has broken below the recent support level of $8,567. The digital currency has been trading sideways for the past week, slowly losing more major support levels.

It’s important to note that the current price of $8,595 is the lowest level in around 2 weeks and a half. According to Bitcoin trader and analyst on Twitter, Elixium, Bitcoin is really close to losing the $8,000 level and could go down to $7,300, the weekly support level.

Bitcoin is currently below the 200 EMA & SMA.
If it closes the daily like this then there’s a huge risk that it will dump down to $7,300.

Elixium thinks there is a huge risk of this happening because Bitcoin is currently below the 200 Exponential Moving Average and SMA but he also mentioned the possibility of the bulls taking over again if the daily chart of Bitcoin closes above $9,300.

What are other analysts saying?

According to Aayush Jindal, Bitcoin is recovering but is still facing a lot of resistance near the $8,700 level. He mentions the fact that Bitcoin was able to recover after hitting a new monthly low of $8,457 and climb back up above $8,600.

Unfortunately, this move didn’t last long for Bitcoin and the bulls were rejected hard from $8,790 dropping down to $8,500 within a few hours. The current hourly candlestick is already at a -2.5% and continues to drop.

CoinDesk Markets recently tweeted a BTC/USD chart stating that a loss of the $8,542 level would pave the way for the bears to bring BTC down to $8,327.

What is the actual situation of Bitcoin?

It’s clear that 2019 would be a very good year for Bitcoin. The digital currency was able to hit $13,970 after trading at around $3,400 at the beginning of the year. This recent crash or consolidation depends on how you want to see it, is certainly not that much of a surprise when we take in count how much the price of Bitcoin has increased over such a short period of time. 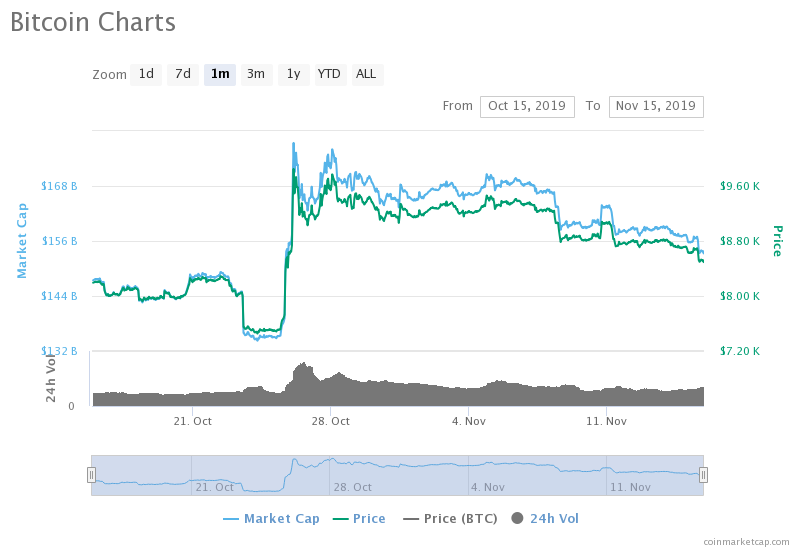 Another interesting fact is the significant decline in trading volume for Bitcoin in the past 2 weeks after the initial bull move to $10,370. This is another indicator that shows that even though Bitcoin is going down, not a lot of people are selling.

There is also another bigger factor, the Bitcoin halving set to happen in May 2020. This event has been historically beneficial for Bitcoin and could be the reason for a bull run in 2020.