The market has turned green after a short and strong dip yesterday. Today, the market is forging upwards and recording substantial gains. Leading the latest charge is Cardano which has soared by more than 10% in the last 24 hours.

A majority of other coins are recording moderate gains of 2% to 5%. Cardano’s surge comes in anticipation of the implementation of Shelley phase making the project fully decentralized.

The move also comes just days after the Cardano Foundation appointed a new director of global PR, communications, and marketing in an effort to expand its reach to a global scale.

Hitting $0.1 Is The Key Target

Cardano now looks set to climb to the $0.1 position which is one of its most key positions. Attempts to reach this position have been futile all year despite rallying above $0.090 regularly. If the digital asset is to achieve this, it would mark a new 2019 high. 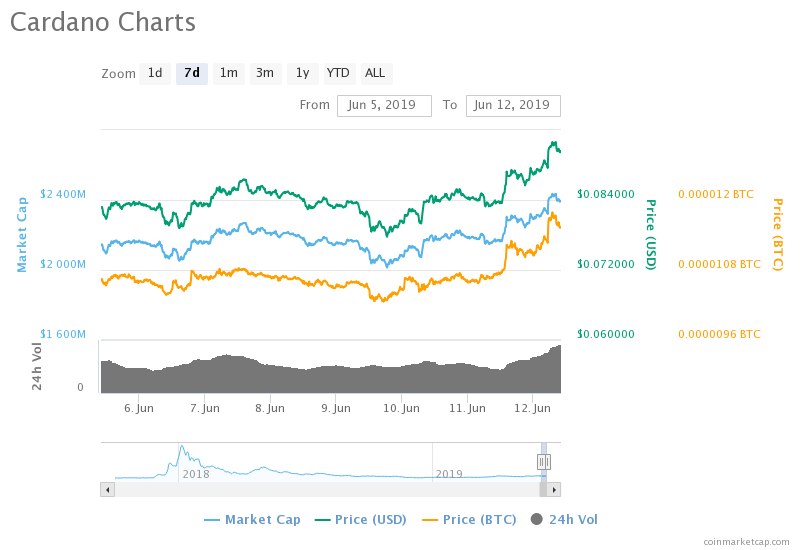 It would also set the stage for Cardano to establish new highs in the coming weeks, once the next phase is implemented. Cardano remains one of the few coins that have a market cap of over $2 billion. The digital asset was able to achieve this despite not being fully developed and implemented.

This shows the project and cryptocurrency have much potential and once fully developed and implemented, Cardano could be one of the largest and strongest networks.

The current rally could see the asset hit the $0.1 position in the days to come. This could be driven by the wider market being bullish or by the launch of the Shelley phase. The coin’s latest dip saw it drop a little under $0.080, which shows there is strong support around this position. If it fails to hold, the coin has further shown greater support around the $0.060 position for the midterm to long term.

Cardano is fairly global but the foundation believes there is much more to be done. The foundation has appointed Bakyt Azimkanov in the past few days. He is expected to act as the director of global PR, communications and marketing.

The new appointee will be a great boost and is expected to increase the project’s brand awareness. Azimkanov brings over 20 years of experience in journalism and communication and will be a great addition to the team.