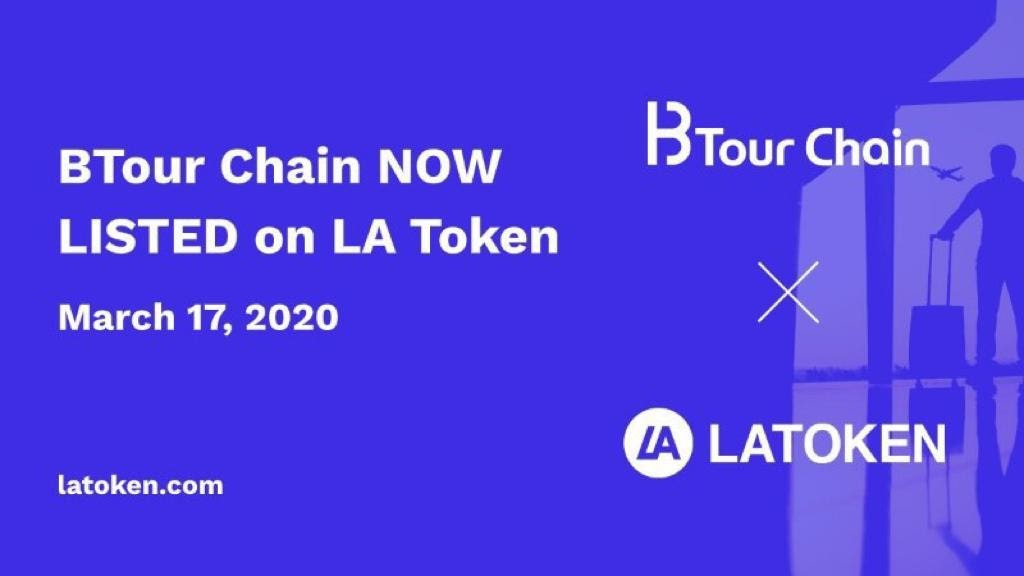 BTour Chain is pleased to announce that starting March 17, BTour token is listed on LA Token Exchange Platform after its successful completion of IEO. The LAToken Decentralized Exchange is a rapidly growing crypto exchange aiming to become a liquidity leader for new tokens. In March 2019 it entered the CoinmarketCap’s top 20.

BTour Chain, using smart devices such as Cryptocurrency ATM /kiosk and PoS will collect information about tourists such as tourists’ traffic flow, consumption patterns, etc. The collected data will then be analyzed using big data technology. This results in accurate and reliable data that can be distributed using blockchain technology to tourists and tour element suppliers (TES) for customized marketing.  In this way, BTour Chain’s blockchain technology will solve problems rooted in the current tourism industry such as lack of trust and high transaction costs accompanying cross border settlements and payments, fluctuations in the exchange rate, and convertibility issues in earning/using various reward points for tourists.

The eco-system created by BTour Chain is not only business-driven. BTour Chain aims to donate a certain portion of its profits to promote its idea of Global Good. Tourists can also be able to donate through the BTour Chain Philanthropy system. Donations will be used by institutions and foundations to protect world heritage and help people in water-related disastrous environments.

By the end of 2020, BTour Chain plans to start offering service coverage in more than ten countries in conjunction with the international advisory groups. Also, to discuss future cooperation with UNESCO and other international tourism-related organizations for philanthropic efforts, as well as to launch BTour Exchange platform.

To find out more about BTour Chain, check the following links:

USDT Is A Game Changer For Online Poker