In the last couple of hours, Bitcoin has extended its mid-week rally, hitting a little over $4,100. This move marks a 5-week high and sees the coin breakout of its recently established resistance position of $4,080.

This move sees Bitcoin solidify its short-term bullish view, nearly ensuring itself a position above $4,000 in the days to come. Bitcoin having hit $4,100 has encountered strong resistance, and has slightly dropped back to $4,098. Should the bullish sentiment persist in the coming days, Bitcoin is assured to rally above $4,100 and continue to strengthen its short-term outlook. 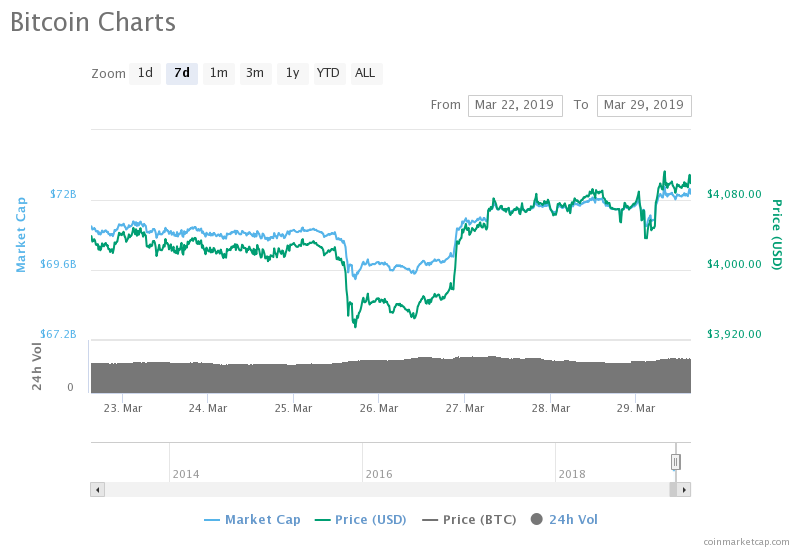 Despite several attempts to rally, Bitcoin is still unable to rally high enough to retest the $4,200 position. Although the number one cryptocurrency continues to improve and enjoy a great level of stability (setting a new low volatility record for March), $4,200 remains elusive. Above this position is the only way it can ensure a long-term bullish view and ensure prices do fall back below critical support positions.

In its current price, two positions come into consideration during the weekend, $4,050 and above $4,100. If Bitcoin ends the weekend below $4,050, this could weaken Bitcoin’s bullish short term prospect. But if it is able to extend its gains and end the weekend anywhere above $4,100, this will see the coin begin the week strongly and could possibly see Bitcoin hit $4,200 by end of it.

Some analysts have previously stated that they expect that Bitcoin will remain stuck in its current price range for weeks. But could this turn into months? If history repeats itself, this will be the case.

The coin’s current price pattern is a reciprocate of what it did back in 2015. Bitcoin largely traded within the $200 and $300 price range, where it remained for months before breaking out in November. If this will be the case again in 2019, then most 2019 bullish predictions will have been thrown out of the window.