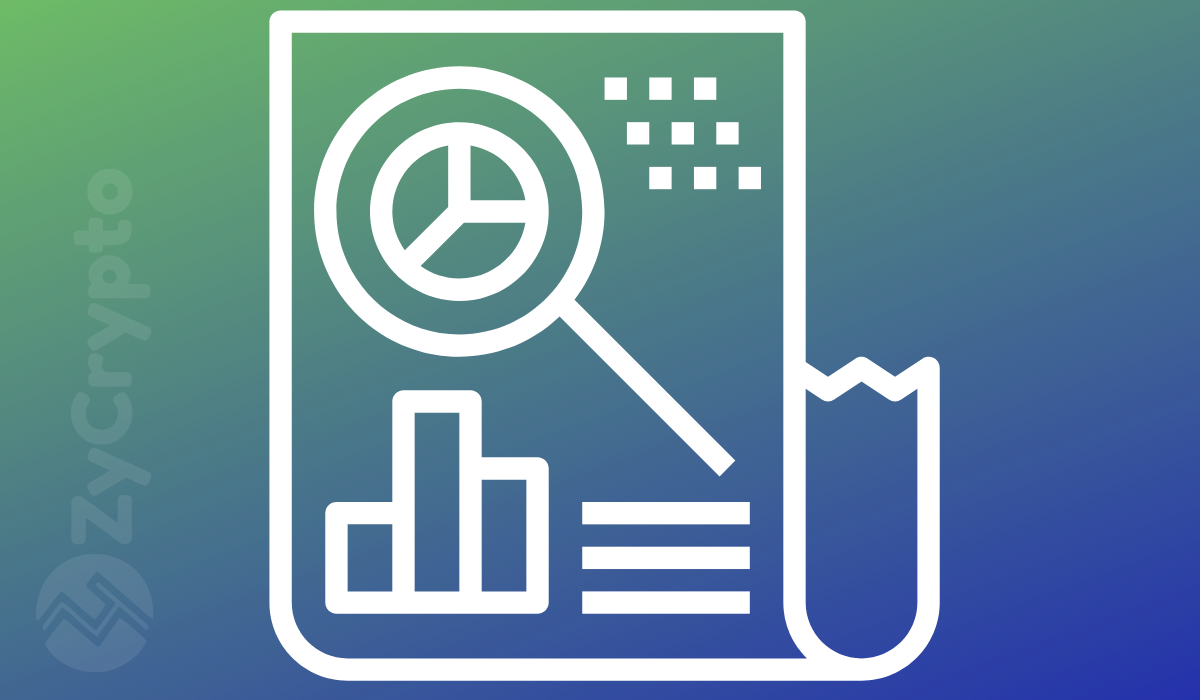 Over the last 24 hours, there has been a generally bearish outlook in the markets, with most charts turning red. The downward trend look set to continue with all indicators pointing towards a bearish run for the top twenty cryptos. The 30-day moving average has been dominantly above the 9 days moving average with the two forming a contracting triangular pattern across today’s focus coins.

The bearish outlook in the charts has affected investor sentiments with many investors making sale offs which led to RSIs going into the ‘oversold’ area as seen below: 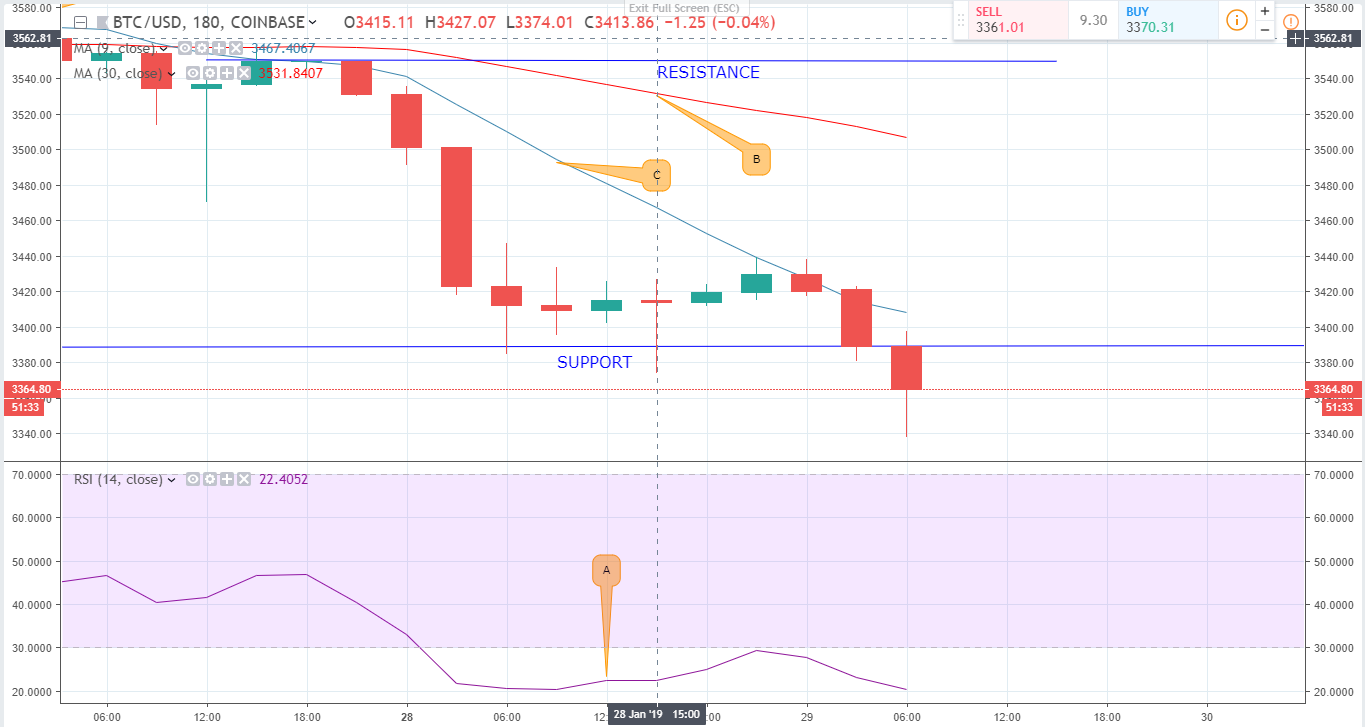 Over the last 24 hours, the BTC/USD pair has dropped from $3531 to $3381, a 4.25% drop. The downward momentum affected investor sentiments in Bitcoin, with the coin dropping into the ‘oversold area’ for a few hours as seen in the RSI (A). This has seen Bitcoin’s market capitalization hit $60.6 Billion, having sold $6 Billion over the last 24 hours.

The bearish momentum looks set to continue, with the 30 days Moving average (B) dominantly above the 9-day moving average (C). The two formed a contracting triangular pattern which signals a strong downward trend.

Currently, the 9-day moving average is acting like the price support which indicates that if the Bulls can up their momentum, an upward price reversal is likely. 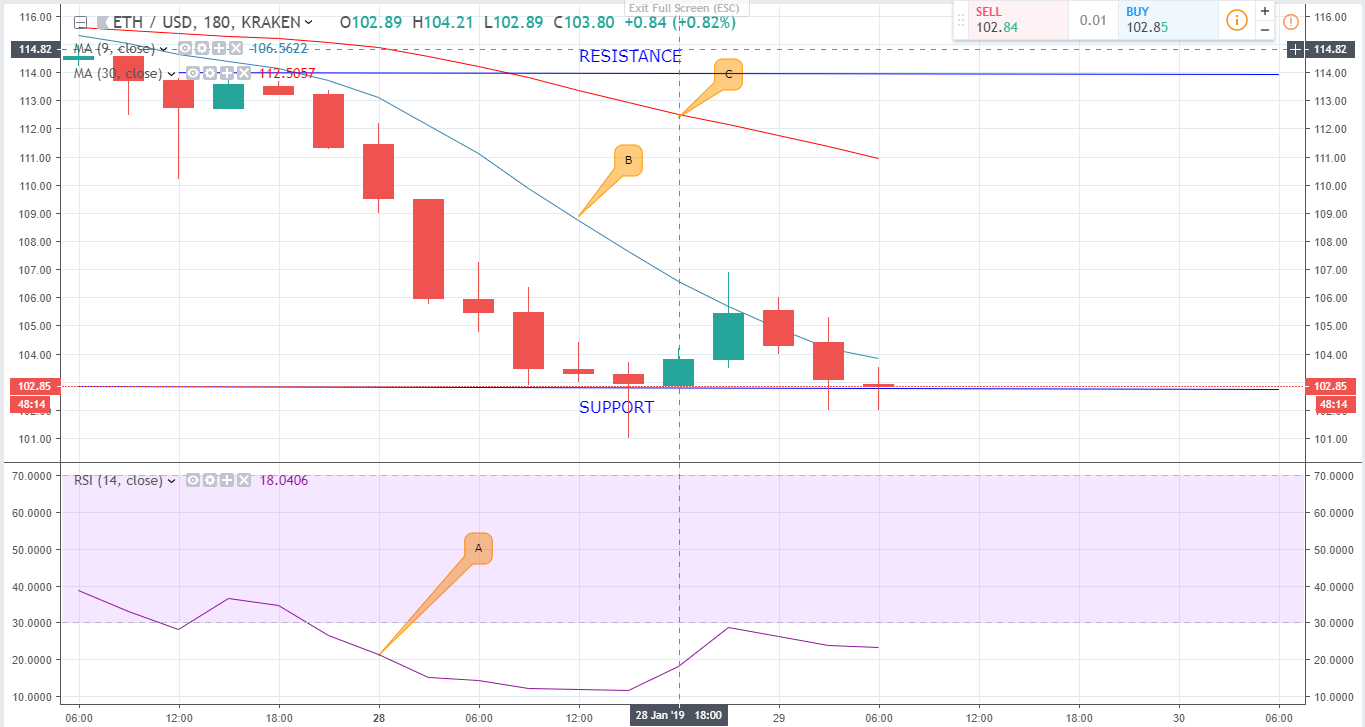 Ethereum has gone through a Bearish run over the last 24 hours, dipping in price from $109 to $102. This represents a 6.4% drop with all indicators pointing towards a further drop. Ethereum dropped into the ‘oversold’ area for a better part of the day (A) with the RSI dropping to as low as 11. It is currently struggling to get out of this zone which shows low investor confidence in the coin.

The increased market activity has seen its market capitalization clock at $10 Billion, having sold $3 Billion in the last 24 hours.

All indicators signal a strong Bearish momentum in the near future. The 30 days EMA is above the 9 days EMA with the two forming a contracting triangular pattern. This shows Ethereum’s price may drop further. 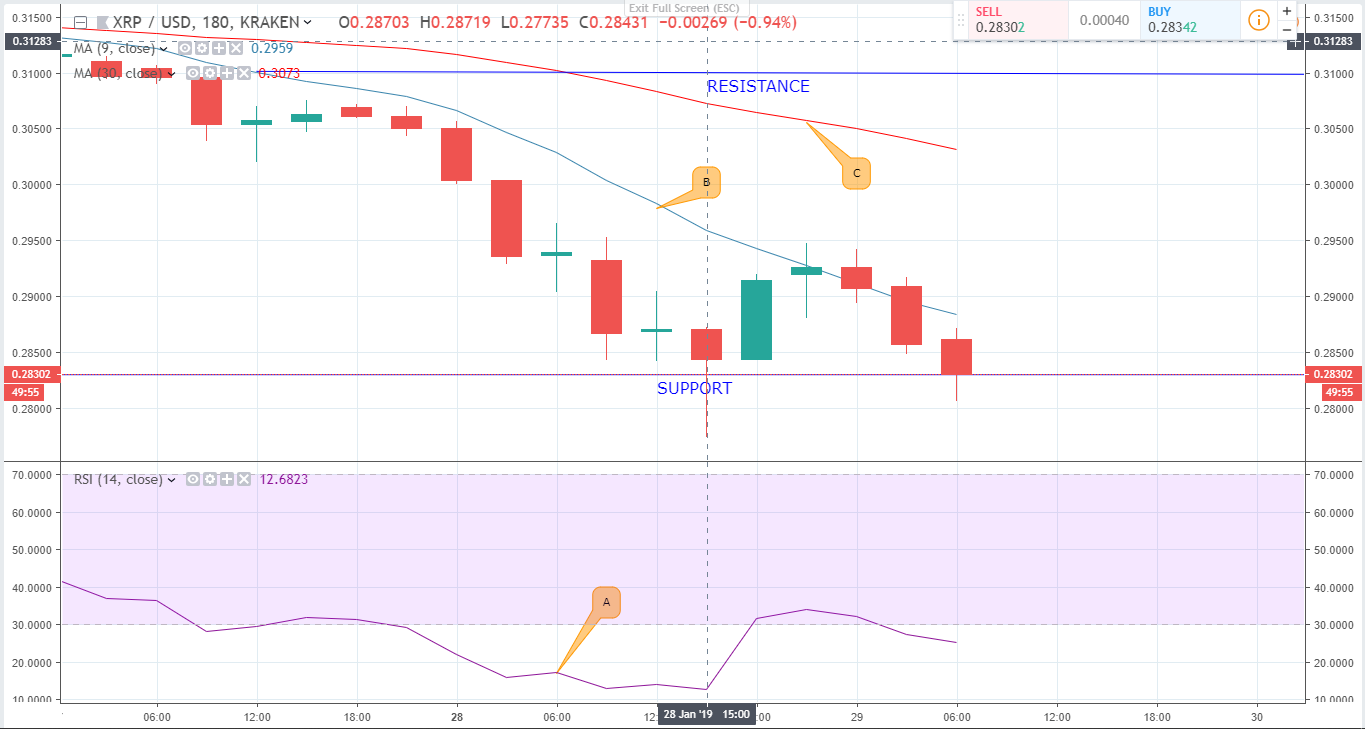 Ripple is experiencing a strong bearish momentum which has led to increased sale offs. The RSI (A) is at the ‘oversold’ area which shows investors are increasingly preferring to sell their holdings to avoid making even bigger losses. The 30-day moving average (C) has been dominantly above the 9 day EMA which shows that the bearish momentum will continue.

Price has dropped from $0.305 to $0.286 with the 9 day EMA (B) acting as price support. This shows that if the Bulls can up their momentum, an upward price reversal is possible.