The big bull has made the long-anticipated climb and traders are more than excited about this outcome. The past 24hrs had Bitcoin hitting another very significant milestone, one that will go on to largely contribute to BTC’s possibility of making yet another breakout in trading price, and this is expected to happen sooner than later.

To put it simply, Bitcoin gathered enough momentum within the last 24hrs and took a major upswing to break above $5400. At press time, BTC is trading at $5,579 and that is not nearly the half of it, BTC has also garnered fair gains, enough to debunk any uncertainty on whether to expect any major decline. 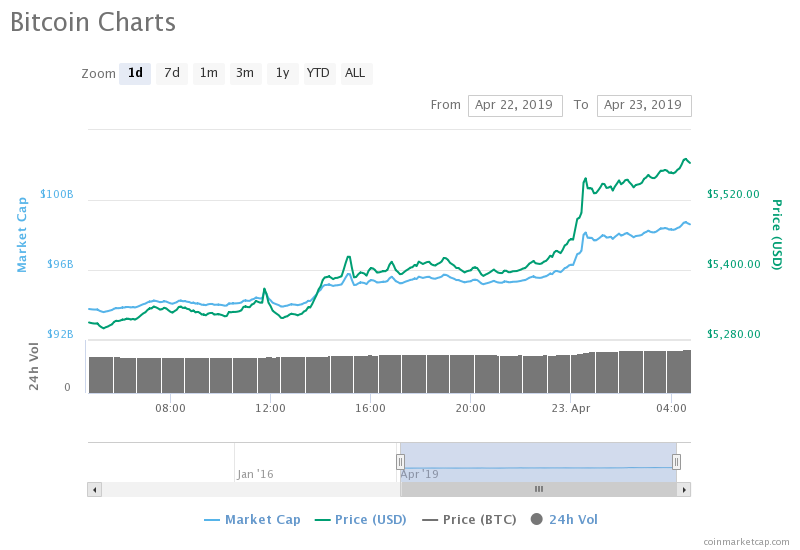 It would be interesting to note that Bitcoin had previously broken the $5600 level as it went on to trade at $5641, making this the first 2019 all-time high for the big bull. Part of Bitcoin’s ability to have made this crossover can largely be credited to BTC’s ability to have maintained the $5000 support level for 3 weeks straight.

Bitcoin has also seen some impressive upsurge from the trading volume, which is swiftly leveling up as well. With over $2 billion increase in trading volume between now and the last 24hrs, Bitcoin’s market cap is now nearing the $100 billion mark, making it more than twice as valuable as every other cryptocurrency.

Trading pairs of XBT/USD have also contributed to this growth, with a total of $2.82 billion from Bitmex traders, trading volume is expected to continually skyrocket. FCoin traders are also pumping trading pairs BTC/USDT which is now totaling at $1.55 billion at the time of this writing.