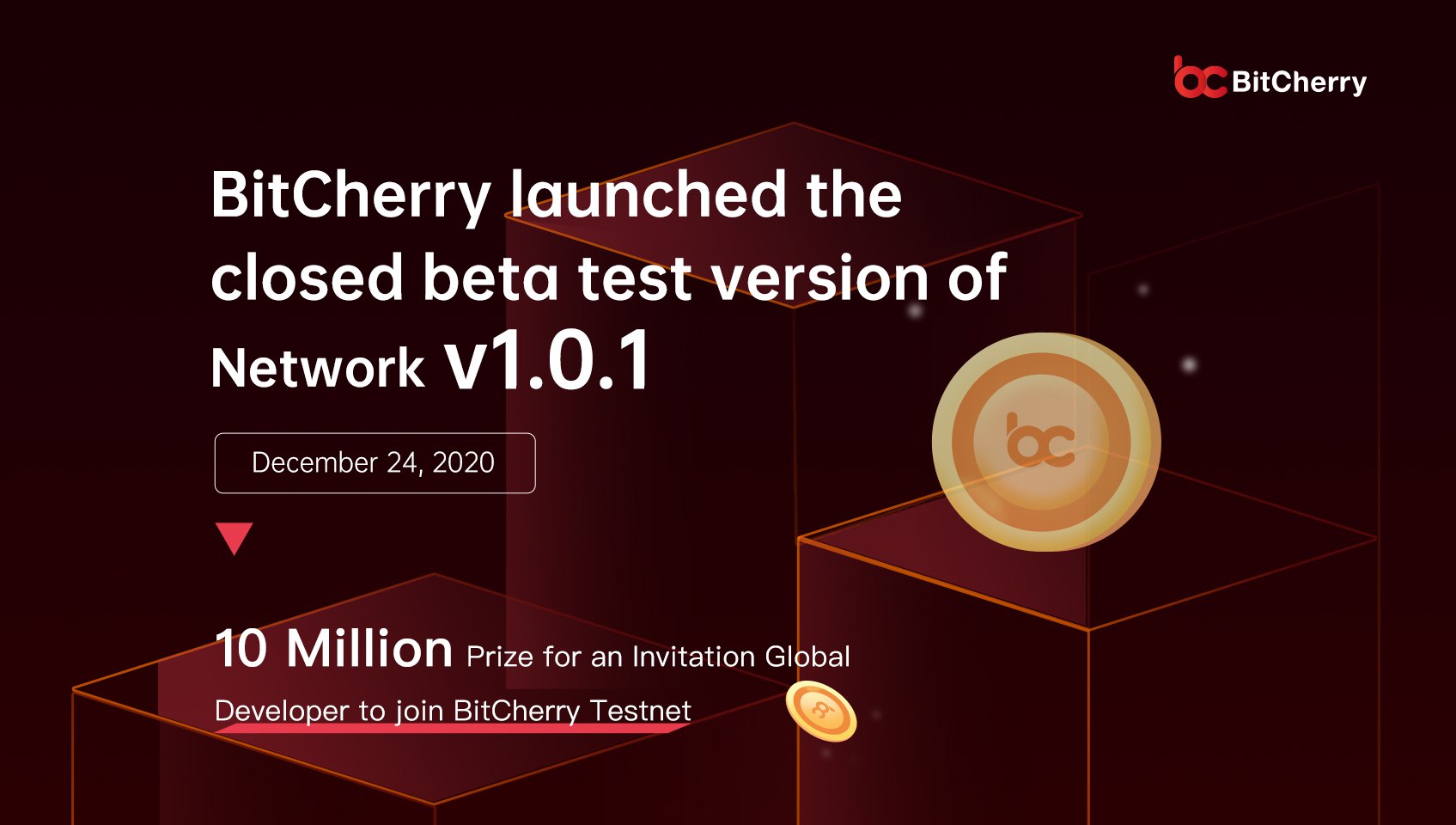 December 24, concerning blockchain project BitCherry announced v1.0.1 version of the test network formally launched. As the world’s first commercial scalable blockchain infrastructure based on IPv8 technology BitCherry is committed to building commercial thoroughfare blockchain technology and the reality of social links and helps traditional enterprises construct trusted distributed business environments. To this end BitCherry has been focused on defining and critical system components to provide the most basic, the prior art by improving the blockchain pain points, can build services in all types of commercial, high-performance, high-security, high availability of expandable IPv8 blockchain infrastructure platform.

BitCherry innovative thinking to a new physical layer network protocol built P2Plus to-end encryption, to achieve highly scalable data architecture by improving the relationship between the map by hash map provides intelligent contracts, such as consensus across the chain operation mechanism provides high performance for global business, high security, high availability of the underlying technical support. On the consensus algorithm, BitCherry in the data structure based on a hash map, pioneered the blockchain technology combined with six degrees of separation theory, to create a unique aBFT + PoUc consensus. And a “main chain + side chain + sharding” across the chain structure to provide high performance, and therefore BitCherry known chain is considered one of the most secure public chains. At the same time, because of good architecture design and programming skills, BitCherry’s operating efficiency and stability are far ahead of other public chains.

BitCherry founder & CEO Paul said: “The BitCherry test network v1.0.1 on the line, BitCherry infrastructure network has an initial size, development has entered a new stage, which is an important milestone in the development of BitCherry to the main network. Before BitCherry main network formally launched, we will conduct multi-stage network test, update functions according to a fixed stage, will implement create/ node election, the electoral consensus/ Verification, cross-chain interaction, completion of the network economic system and peripheral tools, improvement of the developer system, etc. We will continue to improve and enrich the technical content to create a blockchain infrastructure that can fully support all kinds of businesses.”

Each sub-account can independently transfer funds, execute smart contracts and other permissions, fully protecting account security. Account address generation complies with the BIP44 standard, supports seamless conversion of Ethereum addresses into system internal addresses, and reduces the barriers for developers to use.

Can create a wallet account and use the test currency to conduct basic transactions and pass transfers. In addition to the main currency, each account can also have native built-in ERC20 standard assets (sub-currency), such as UDST/ETH/BTC/TRX/EOS, etc., without writing and deploying smart contracts, and saving the loss of virtual machine calls, Higher performance, and will support ultra-low handling fee transfer.

The EVM virtual machine is used to provide a secure execution link for the smart contract bytecode and support the Solidity language to develop smart contracts. In the second phase of the virtual machine WASM and support other high-level programming languages Go / Rust / C / C ++ / JS / TS, etc., will support the Square Ethernet interfaces, developers can migrate to contract on BitCherry network for seamless migration.

Provides functionality comparable to Etherscan the blockchain explorer BitCherryScan, in a visual way, to show the operation of the blockchain, and supports query block transactions, accounts, intelligence contracts.

Mining based on PoUc Consensus

Based on the PoUc incentive system, it also has the functions of proxy voting and mortgage assets to obtain corresponding mining rewards. The block reward mechanism is equipped with an automatic adjustment algorithm to encourage more users to participate in mining. (Mining, mortgage, and voting functions will be opened in the second phase of the testnet)

At present, the blockchain industry is still an emerging field. Groups who have not been exposed to the blockchain or have never held digital currencies still account for a large proportion. Therefore, it is necessary to consider how to enable users who have never been Use DApp in life. BitCherry upholds the “build a scalable blockchain for the global commercial infrastructure” values, advocates provide customized applications and services for different business scenarios, to help smooth the transition to a traditional corporate chain of blocks, while for developers user-friendly, developers can more easily promote their DApp to ordinary users. At the same time, regular users can also experience the use of BitCherry DApp to live the convenience and optimization. When BitCherry solves this problem in the future, the market will also be more inclined to use BitCherry blockchain solutions.