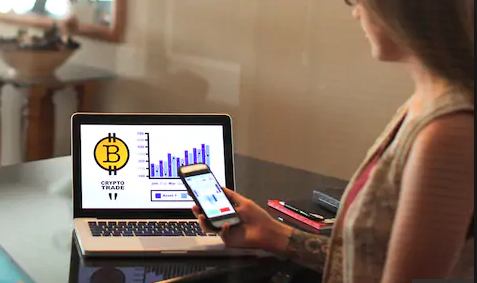 If you spend a decent amount of time in the financial news reporting segments; you’ll be quick to assume that cryptocurrencies are on par to replace fiat currencies. From traditional Wall Street news media to wannabee talking heads, and everything in between, there’s no shortage of reporting on the cryptocurrency market.

Last year Gallup and Wells Fargo conducted a study on U.S. adults who have at least $10,000 invested in mutual funds, bonds, or stocks in or outside a  retirement savings account. The report showed that 96% of U.S. investors have heard about Bitcoin or other cryptocurrencies. However, as much as 72% of those investors don’t plan to ever buy cryptocurrencies. In fact, three out of four investors consider cryptocurrencies very risky.

In another report by Harris Insights, only about 8% of Americans are invested in cryptocurrencies while as much as 52% of Americans own stock. For scale, the market cap of the entire cryptocurrency market -comprising of Bitcoin and 2235 other coins – is around $264B. The market capitalization of Microsoft Corporation (MSFT) alone is over $1 trillion, Amazon (AMZN) has a market cap of $920B and Apple (AAPL)’s market cap is $893B.  In essence, the entire cryptocurrency market with its more than 2,000 coins and tokens is currently not worth half as much as 1 of the top 5 companies on Wall Street.

Interestingly, younger Americans seem to be willing to take a bet in cryptocurrencies on traditional assets. For instance, the results of a study by Blockchain Capital revealed that 30% of Americans within the 18  to 34 age bracket would prefer to invest $1000 in Bitcoin rather than in stocks. If you’ve invested $1000 in Bitcoin on January 1, 2015, your portfolio would have grown by 3,108% — it would have been recklessly unrealistic to expect such a return from the stock market.

A couple of months ago, eToro, an Israeli-based social investing and trading platform announced the launch of its U.S. operations. The company is actively trying to change the narrative about the non-involvement of U.S. investors in the cryptocurrency market.

One of the reasons U.S. traders have not been actively engaged with cryptocurrencies is that it still sounds somewhat unconventional and complex and many of the trading tools in the cryptocurrency market seems to be designed for professional Wall Street traders and not every day retail traders.

With the U.S. launch of eToro, people in the U.S. can now easily trade in Bitcoin, Ethereum, Ethereum Classic, XRP, Litecoin, stellar, Bitcoin Cash, EOS, and Dash. In the words of Yoni Assia, eToro’s founder and CEO, “consumers all over the world should have access to the tools they need to participate in cryptocurrency markets, regardless of their expertise.”

eToro is currently available in more than 140 countries where it has more than 10 million users. Last quarter, eToro’s U.S. launch is currently focused on facilitating an engaging cryptocurrency trading experience while it plans to add other assets classes in the coming year.

Yoni while speaking on the “Off the Chain” Podcast revealed that the driving philosophy behind eToro is to make it easy for people to trade, share the knowledge they’ve gained in their trading experience, and connect with other traders in a transparent way.

A new type of exposure to cryptocurrencies

If its U.S. project succeeds, eToro might be able to attract investors from the relative safety of Wall Street to the exciting world of cryptocurrencies through the social trading component of its service. eToro has differentiated itself from other trading platforms by making trading for fun and engaging for traders as opposed to the boring UX and UI of traditional stock trading platforms.

The social component of platform serves as a means to connect with other traders, ask questions about their trades, gauge their sentiment on the market, and generally have a supportive trading community. It also provides traders with personalized news feeds where they can read the side comments that other traders are making about the market in real time.

Finally, the most exciting feature of eToro’s is its CopyTrader feature that allows new traders to follow other influential traders and automatically copy the trades they make in their portfolios. Experienced cryptocurrency traders can join the program so that people new to cryptocurrency trading can take a faster route to master the market by following their trades.

Disclosure: Some of the links in this post are affiliate links. We may receive a commission for purchases made through these links.